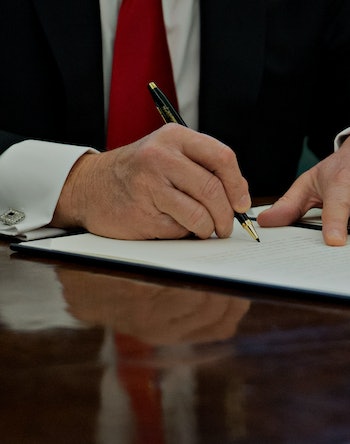 In 1987, a 12-year-old Iranian political refugee arrived in Canada with his parents. He spent the next 15 years there, completing his undergraduate degree at the University of Toronto before moving to Boston to finish his Ph.D. at MIT in 2005. Rather than return to Iran or Canada, he became a faculty member at Harvard Medical School in 2006 and continued to pursue research on tissue engineering, a field of regenerative medicine that uses stem cells to create new tissue and artificial organs.

On Friday, Dr. Ali Khademhosseini, a naturalized citizen of the United States, found out that he could be denied entry to his adopted country if he chose to leave. When President Donald Trump singled out Iran as one of seven countries known for “harboring radical Islamic terrorists,” he also singled out people like Khademhosseini for a historically unprecedented form of persecution. Though President Trump may walk back the parts of his executive order targeting citizens and green card holders, Khademhosseini now has reason to believe his success as an American scientist is less important to the government that purports to represent him than where he was born.

He is far from alone. He chased an Iranian-American dream.

According to political economist Akbar E. Torbat, the flow of well-educated Iranians into America can be traced to political turmoil in the country in the 1970s and early 1980s, when Ayatollah Khomeini declared students “Westoxicated” and moved to shut down several academic programs not aligned with hardline Shiism. For science students, this made the United States a logical and desirable destination. During the height of the upheaval, the United States also attracted a massive number of academics of Iranian origin. In June of 1999, the International Monetary Fund came out with a report that ranked Iran first in terms of brain drain among 61 developing countries for contributing their best and brightest abroad. By 2009, about 62 percent of Iran’s academic elite had emigrated abroad. The IMF estimated that loss cost Iran $50 billion per year in capital losses.

Immigration and Naturalization Services data that shows that about 1 in every 5 foreign-born students in the late 1970s had Iranian ancestry. Ironically, the Iranian government actively encouraged students to pursue educations abroad, distributing oil profits to families with children studying abroad, thereby funding their educations in the hopes the investments would lead to these highly educated students returning home to enrich the Iranian economy. For over a decade, most foreign-based students in America were Iranian. And an outsized number of them studied science and engineering, according to Torbat’s analysis of demographic data.

The Iranian-American scientific community flourished, becoming an integral part of American science and facilitating an economically and culturally valuable exchange. Then Trump put pen to paper.

“The ban came as a surprise,” Khademhosseini said, pointing to both his personal situation and that of students in his lab, some of whom were from the blacklisted countries. “What happens to them? They can’t travel to Iran to see family. Even though the ban is temporary, it’s likely the wording could be made permanent.”

If Trump’s idea is to send these highly skilled workers home, his agenda lines up neatly with that of Iran’s Islamist rulers, who sponsored many students in the hope that they would bring American knowledge back to the Middle East. To date, it hasn’t turned out that way: Many Iranians — exact numbers are unclear, but in California alone, the number hovers above 100,000 — remained in the United States, dedicating their professional and personal lives to the American science establishment. Iranian-Americans, in fact, became instrumental in pushing forward America’s scientific agenda. Mona Jarrahi, a faculty member at the University of California, Los Angeles since 2013, is a proud member of that group.

Jarrahi arrived in the U.S. to pursue her master’s degree and Ph.D. in electrical engineering from Stanford University in 2001 after growing up in Tehran; her flight was delayed because of the 9/11 attacks. After she earned her doctorate, Jarrahi moved first to Berkeley to complete a postdoc, then earned a spot as faculty at the University of Michigan. Now at UCLA, she studies terahertz technology, building the security sensors used at airports and by NASA to detect ozone levels.

Jarrahi is an American citizen but is far more likely to leave because of the ban. She says she is “insulted” and she points out that she doesn’t have to put up with the ban on her family members, dual citizens of Australia and Iran, visiting her.

“When Trump was running for President, I had a lot of departments in Canada offering me jobs,” she said. Will she rethink those opportunities? She hesitates. “I don’t know,” she says after a long pause. “I really don’t know.”

Jarrahi may hesitate, but Canada hasn’t. Prime Minister Justin Trudeau has made accepting refugees and immigrants as “New Canadians” a cornerstone of his domestic policy, arguing that the country’s politics and economy benefit from the arrival of talented foreigners who diversify the country’s base. According to a 2005 paper, Canada is beginning to pull valuable Iranian scientific talent away from the United States, very likely because of its more liberal open door policies. The ban will likely divert both talent and knowledge north.

Political opposition to scientific research could compound that problem.

Khademhosseini’s research involves stem cells, which has incited controversy among the religious right for its potential to create “unnatural” life. Trump has, after all, aligned himself with groups opposed to basic scientific research.

The executive branch’s belligerence inspired Jen Golbeck, a computer science professor who studies social networks, to launch the Freedom of Science Twitter account last week in an attempt to organize the alt science accounts that were cropping up in the aftermath of Trump’s inauguration in response to what many government scientists interpreted as the censorship of data. Friday’s executive order, however, transformed the account into a platform supporting citizens from the seven banned countries in connecting them with other scientists — Iranian or otherwise.

“I know a lot of computer scientists who are Iranian and have green cards,” she says. “They’re locked out or in.” Golbeck’s Twitter is overflowing with scientists who are trying to help in any way they can — dogsitting, attorney contacts, backup research materials. “Iranians — really, academics from any of those seven countries — they’re here because they’re scientists. They don’t want to bring it to Iran. They aren’t terrorists. They want to engage in scientific society and work.”

Still, Iranian Americans are clinging to the hope that their adopted home will remain open to them. “I really believe in America,” Jarrahi says. She’s sitting at a desk piled with applications, many from Iranian students desperate to work with her on cutting edge technologies.

“I don’t know how to proceed,” she says.