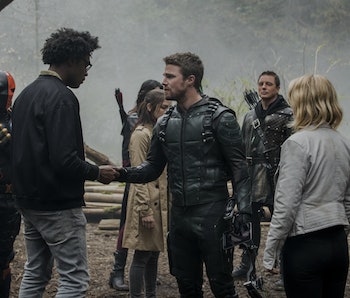 Who survived Prometheus’s bomb on Lian Yu? Marc Guggenheim, executive producer of Arrow, says, Who cares? In a new interview, the showrunner says the simple question of who lived and who died in the Arrow fifth season finale isn’t the point.

On Thursday afternoon, Guggenheim appeared on the newest episode of Entertainment Weekly’s superhero satellite radio show and podcast Superhero Insider to talk about the season finale of Arrow and DC’s Legends of Tomorrow. While Rip Hunter will square off with his old teammates again next season on Legends, fans are trying to figure out who survived the explosive finale of Arrow. But Guggenheim urges fans not to think in alive/dead binaries.

“A lot of the discussion that we’ve had and a lot of the discussion we’ve seen online is very binary — people either live or they’ll die,” the producer told Superhero Insider. “There are other consequences that can come out of what happened at the end of [Episode] 523. While everyone is focused on one thing, you know us on Arrow. We may be doing something else.”

One way fans have been trying to identify survivors are through news of actor contracts. Guggenheim warns that this isn’t a very smart idea. “I know everyone’s, like, trying to determine who survives, who dies, what is the result of the cliffhanger based upon people’s contractual status,” said Guggenheim. “I would say, that’s not necessarily a good idea.” And the producer brings up a rather famous example of such a scenario: The Walking Dead, in which Season 6 ended with the debut of Negan.

“The example I’d like to point to … is in The Walking Dead. They kind of had a season finale similar to ours, a group of characters who were season regulars in a dire situation at the end of their season. Just because they’re season regulars doesn’t mean they came out alive.”

Arrow will return October 12 at 9 p.m. Eastern on The CW.