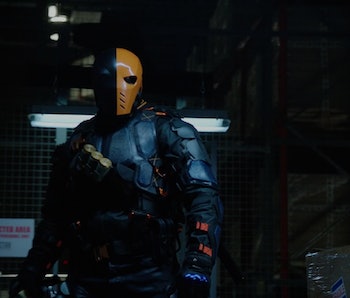 These are desperate times for Oliver Queen, which means Green Arrow has resorted to desperate measures. In order to take down Adrian Chase and save his friends, Oliver breaks into an A.R.G.U.S. facility to free two notorious bad guys: Deathstroke and Captain Boomerang. Although Slade Wilson and Digger Harkness help Oliver locate and free his friends, everyone is still understandably skeptical.

Halfway through the episode, Slade proves his haters right by double-crossing Team Arrow and barking orders off-screen. “Tell Adrian Chase I’ve got something for him,” he says. When we see Slade again, however, he’s triple crossed Adrian, and Oliver explains quickly to Team Arrow that allowing Slade to act out a false betrayal was the only way to get access to Adrian’s creepy, faux-Renaissance era looking dungeon.

What goes down in Adrian’s building is a multi-character, good vs evil free for all. Black Siren and Black Canary have a quick scream-off and they both lose, Deathstroke slices his way through multiple opponents and Oliver does his best to beat the stuffing out of Adrian Chase while yelling, “Where is my son?!” intermittently. Captain Boomerang, though a surprising addition to the fray, is largely absent through most of the action.

When Oliver finally gets Adrian into a headlock, preparing to snap his neck, Adrian spits out, “Show everyone who you really are!” Just then, the entirety of Team Arrow walks ominously into the hallway, and Oliver screams, letting Adrian fall limply to the floor. He tells Adrian he’s no longer a killer, Adrian responds with, “I knew it would come to this,” and he whispers, “Your son is dead, Oliver.” The moment is so disturbing that even Slade Wilson removes his helmet in shock.

Felicity tells a seriously freaked out Oliver that Adrian has coated the island in landmines, and that the entire land mass will go up in flames if he’s killed. Adrian disappears in a puff of smoke and reappears on a speeding boat, where Oliver tries to beat him into submission a second time. He keeps yelling, yep, you guessed it, “Where’s my son?” In order to coax Oliver into killing him, Adrian yanks Oliver’s young son out of the boat’s cabin and gives him yet another ultimatum. Oliver tearfully lowers his bow for just a moment and fires an arrow into Adrian’s leg.

Adrian, finally incapacitated, tells Oliver he’s got a lonely road ahead of him. Just as Oliver tries to make sense of that, Adrian pulls out a gun and shoots himself in the head. Lian Yu, the island behind Oliver, is immediately engulfed in a black cloud, and we’re left to wonder whether Deathstroke was able to get Team Arrow to the other side of the island in time.

Arrow will return to The CW for Season 6 at an unannounced date.