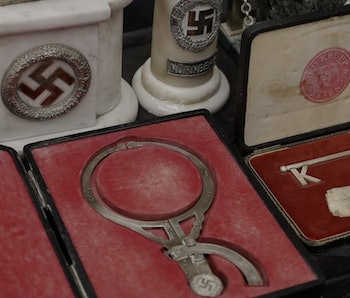 On June 8, Interpol agents conducted a raid on a collector’s home in Argentina. Inside, within a hidden room behind a bookcase, they discovered a trove of 75 Nazi artifacts and memorabilia, all of which are believed to be genuine. There was a bust relief of Adolf Hitler items, Nazi mugs, Nazi keys, Nazi rings, Nazi harmonicas, and more, all bearing symbols and designs of the Third Reich.

The Interpol (international police) investigation began when unrelated historical items sought after by UNESCO for cultural preservation were found in a gallery in Buenos Aires. Agents then followed the trail back to the still-unnamed collector’s home. The Associated Press reports that the current theory by investigators is that the artifacts were brought into the country by Nazi officials who fled there following Germany’s defeat in World War II, via infamous “ratlines” or escape routes from Germany. Some were later captured and tried, while others died in hiding. It is not yet known to whom the artifacts would have originally belonged.

Back to the artifacts, this quote was given to the AP:

“Our first investigations indicate that these are original pieces,” Argentine Security Minister Patricia Bullrich told The Associated Press on Monday, saying that some pieces were accompanied by old photographs. “This is a way to commercialize them, showing that they were used by the horror, by the Fuhrer. There are photos of him with the objects.”

There was, however, one artifact that lends a clue: a head-measuring medical device that was found among the other relics.

It’s an indicator that the original owner of the items may have been someone who used the device, which itself is a horrifying reminder of the racial Nazi experimentation.

Much has been made in popular culture of the Nazis’ apparent proclivity for pseudoscience. It’s been inflated and featured in both movies, like the first Captain America, and video games, like Bethesda’s Wolfenstein series, in an effort to make the Nazis an even more dangerous and menacing group of antagonists than they already are.

But behind all the added Hollywood drama, there is some truth. Germany’s highest ranking Nazis bought in some weird ideas of human experimentation — and that’s putting it lightly.

Hitler himself had a well-documented and potentially fatal obsession with occult objects and mysticisms, a characteristic with which anyone who’s seen Indiana Jones will be familiar. It was also the Nazis’ belief that the superiority of the Aryan race was not just cultural but biological.

Hitler and his cohorts were proponents of anthropometry, a now defunct school of social science and biology that sought to draw connections between people’s outward physical characteristics with traits specific to a certain psychology or race.

The Nazis were also interested in head shape and structure, and it was their party’s belief — supported by what was then considered a robust school of scientific thought — that Aryans were the master race. And beyond the blue eyes, white skin, and blond hair, one of the telltale markers that separated true Aryans from other races (such as the Jewish people) was the shape of one’s skull.

That’s what makes the discovery of this particular artifact so powerful, fascinating, and disturbing all at once. It would have been used, quite possibly by whoever initially brought it with them from Germany, to perform what would have been considered a medical examination to make determinations about the degree to which a subject could be considered human.

The sight of the other objects is certainly surreal, especially since many were reportedly accompanied by photographs showing them in use — one perhaps even by Hitler himself. But they, at least, are decorative, ceremonial, or ornamental. The head-measuring tool is just that: a tool used to enforce a worldview informed by racist science.

It’s also hard to ignore the timing of the discovery. Since the beginning of 2017, the United States has been enduring a spate of resurgent anti-Semitism, a reminder that the views represented by the artifacts are not fully gone.

In the future, items in the secret room — the head-measuring device in particular — might be used to educate about its past purpose and ensure that people don’t forget that nothing, not even science, is immune to bigoted corruption. To borrow a phrase from Indiana Jones, it belongs in a museum.

Other notable items found in the raid include: