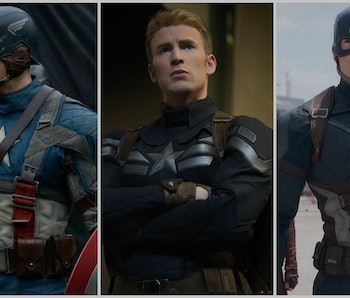 With so many superheroes on screen and the burden of carrying a “cinematic universe” into its next rollout, it’s hard to fathom that Joe and Anthony Russo’s wildly successful Captain America: Civil War is also the end to Marvel’s Captain America trilogy. Does Marvel even do proper trilogies?

It does indeed; they’re just hidden in the tapestry and the arcs are driven by characters, not by plot. Though the main attraction of Captain America: Civil War is its monstrous street fight, the real secret to why the movie works is that it’s the end to one character’s journey.

Don’t let nods to the Avengers or breakout characters like Peggy Carter distract you: Marvel’s Captain America movies are all about a wimp’s path to becoming an unflappable, unwavering soldier of ideals. Eager to serve his country at the height of World War II, puny Brooklyn boy Steve Rogers (played by Chris Evans, whose performance in these movies are woefully underrated) is subject to the Super Soldier program and becomes Captain America, a star-spangled superhero who brings down the Red Skull in an alternate World War II. Frozen for nine decades after his final fight, Steve awakens and continues his duty in a completely different, completely alien world: the 21st century.

But whether it’s 1944 or 2016, in his heart Steve is the same guy. He’s the same when he’s a 90-pound asthmatic, and the same leading the Avengers against a Chitauri invasion. Captain America and Steve Rogers are interchangeable alter-egos, the costume functioning for utility and to inspire anyone bearing witness. He isn’t a jingoist flag-waver, but a hero whose only allegiance is to his moral compass. In Captain America: The First Avenger from Joe Johnston, we’re introduced to Steve Rogers as a kid left behind while his generation goes on to greatness. He’s restless and wants to join the war, not out of blind patriotism or for kicks but because it’s the right thing to do.

“Do you want to kill Nazis?” Abraham Erskine asks Steve at a recruitment center. “I don’t want to kill anyone,” he replies. “I don’t like bullies. I don’t care where they’re from.” Nine decades later and Steve is fighting Tony Stark because he feels Stark became a bully.

The world changed in the years Steve went to sleep: The counter-culture revolution, Civil Rights, Watergate, the dot-com burst, even 9/11. Steve just barely missed the recession and Occupy Wall Street when he awakes at the end of The First Avenger, leading into his reinvigorated comeback in 2012’s The Avengers and his full-fledged sequel, Captain America: The Winter Soldier from Joe and Anthony Russo in 2014.

Joss Whedon’s The Avengers was a paradigm-shift for the superhero genre, but it was also a transition for Steve Rogers. It’s no coincidence his cheesy outfit in The Avengers was intentionally lame. As Agent Coulson ominously told him, in the brave new world the Avengers are about to usher in, “people might just need a little old-fashioned.” This was two years before The Winter Soldier would violently shake up the Marvel Universe.

Just as Edward Snowden fled the United States for revealing the Big Brother-like reach of the NSA, the Russos were writing and directing Winter Soldier and its timely commentary on surveillance was fresh and immediate. At the center of the film was Cap’s discovery of his best bud Bucky Barnes (Sebastian Stan), turned into a puppet killing machine by the shadowy forces Cap swore allegiance to. Disillusionment drove Cap into another transformative film, 2015’s Avengers: Age of Ultron, as leader of a now-privatized, independent Avengers.

How can the 21st century destroy Captain America? That was the primary question of the Russos’ 2014 sequel. An icon of a bygone era, what place does Captain America have in the modern age? America is no longer the underdog coming out of a depression to fight an imposing force: America IS that imposing force. Does Cap’s bravery and willpower have the same inspiring meaning when America is powerful enough to fire the biggest guns?

The Winter Soldier ended with Cap/Steve unable to reconcile his duty with his morals. He shifted into independence, and into leadership once more, in Age of Ultron that only set up the seismic shift of Civil War.

Civil War wasn’t just a fight over Bucky, or a fight over ideals. It was a fight for both. For all its newcomers like Black Panther and Spider-Man, and show-stopping moments like Giant-Man, Captain America: Civil War is still Captain America’s movie, and maybe his last. His best friend Bucky is accused of actions he’s innocent of. Captain America is forced to abide by rulings he’s morally repulsed. The movie makes a distinct point that Rogers’s signature with the Sokovia Accords would be a massive symbolic gesture.

But Rogers has never been about gestures or grandstanding. He’s been about action. With a drop of his shield in Siberia, Steve Rogers abandons Captain America, an identity he proudly inherited in The First Avenger. But after nine decades, watershed moments, and more powerful men wishing to use Captain America as an agenda. He’s fought for governments, and they’ve betrayed him. He’s fought independently, and it brought him grief. His only solution is to not fight at all, not as Captain America, when the “A” on his helmet has lost all meaning.

It wasn’t Steve’s idea to become Captain America. The kid just wanted to put on a uniform and get in line. But he was chosen because of his outside-the-box thinking and absolutely stubborn nature. When Steve is bruised and beaten, he gets back up. That’s Captain America’s real superpower: Perseverance. Through three movies, Steve Rogers perseveres, whether he’s holding a shield or not. He can do this all day.