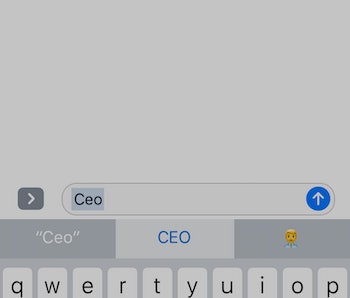 Well this is pretty tone deaf, even for a non-sentient machine.

As Bloomberg’s Emily Banks pointed out on Twitter Friday afternoon, your iPhone’s go-to emoji for “Ceo” is a white male. But don’t worry, if you type out the entire word properly in caps, you get two options: white male, followed by white female. Much better.

Obviously this is not a cute look for Apple. For a business that claims it is striving for a “culture of inclusion”, offering customers two blond emojis as representatives of a position of economic status seems counterintuitive — to put it lightly.

Predictive emojis were rolled out with iOS 10 in September of 2016. In April of 2015, Apple introduced its more racially diverse set of emojis to mixed reviews. Many complained that the new color-variant emojis didn’t offer anything that actually represented diversity, other than skin tone.

A 2016 Backchannel story by Steven Levy notes that Apple’s QuickType keyboard — first rolled out with iOS 8 in 2014 — uses machine learning to track input and make predictions.

Other information Apple stores on devices includes probably the most personal data that Apple captures: the words people type using the standard iPhone QuickType keyboard. By using a neural network-trained system that watches while you type, Apple can detect key events and items like flight information, contacts, and appointments — but information itself stays on your phone. Even in back-ups that are stored on Apple’s cloud, the information is distilled in such a way that it can’t be inferred by the backup alone. “We don’t want that information stored in Apple servers,” says [Apple executive Craig Federighi]. “There is no need that Apple as a corporation needs to know your habits, or when you go where.”