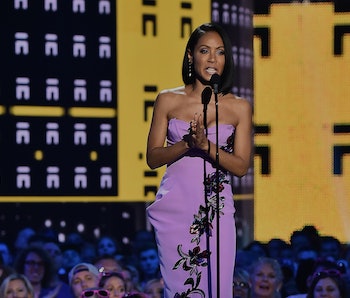 The newly released biopic All Eyez on Me, about hip-hop icon Tupac Shakur, has been both critically and casually panned. But no denouncement of the movie thus far has been as pointed as that of actress and Tupac’s longtime friend, Jada Pinkett Smith, which she posted on her Twitter Friday.

In a post spanning eight separate tweets, Pinkett Smith attacked the film’s factual integrity and what she regards as irreverent disrespect for the true story of Tupac’s life and her place in it. (She is played by Kat Graham in the film.)

“Forgive me… my relationship to Pac is too precious to me for the scenes in All Eyez On Me to stand as truth,” reads the first of Pinkett Smith’s tweets. She points out specific moments in the film — a poem Tupac wrote, a goodbye before he left for L.A., and an argument they had backstage — that simply did not happen.

Pinkett Smith and Tupac were lifelong friends, starting at the Baltimore School for the Arts where they were classmates. It was on the basis of that deep friendship that Pinkett Smith issued her denouncement of the film’s depiction of events, which she called “deeply hurtful.”

She did take pains, however, to target the blame, lifting it off the shoulders of the cast, who she thanked “for bringing so much heart and spirit into your roles.”

All Eyez on Me was directed by Benny Boom and was released on June 16.

More like this
Culture
Jan. 27, 2023
The Master was called a movie about Scientology, but it’s about so much more
By Dais Johnston
Culture
Jan. 19, 2023
28 Days Later is still the greatest zombie story of all time — and it’s not even close
By Jake Kleinman
Culture
Jan. 17, 2023
Wednesday has become a smash hit, but it owes much of its success to its ‘90s predecessor
By Josh Bell
LEARN SOMETHING NEW EVERY DAY.
Related Tags
Share: