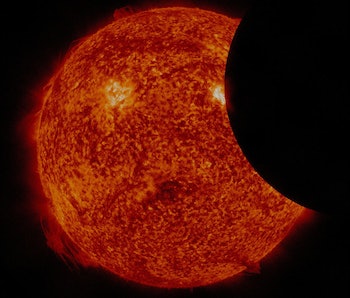 On Monday, all of North America will be subject to a partial eclipse of the sun. Those in a 70-mile wide path streaking from Oregon to South Carolina will be lucky enough to see a total solar eclipse. This includes folks in polar bear-ridden Barrow, Alaska to the spider monkey-rich beaches of Costa Rica — although the farther away one is from the path of totality, the less the eclipse effect will be. People in Stanley, Idaho, for example, will experience the totality of the eclipse, Los Angelinos will see around 60 percent of the sun eclipsed, and those watching from the Panama Canal will witness 25 percent of the sun eclipsed.

In a 70-mile wide path, Americans from Oregon to South Carolina will have the chance to see the moon completely block the sun, momentarily darkening the world in the total solar eclipse, set to take place on August 21.

For those who haven’t made plans to be within that narrow 70-mile wide band called the “path of totality” (considered fairly narrow by astronomers), there’s hope: Any North American can still see the weird phenomena that is the sun being blocked by the moon. You can’t avoid it if you tried.

That’s because while those in the path of totality will experience the total solar eclipse, any one in North America will still be able to see that sun-moon action in a partial solar eclipse — though it’s worth keeping in mind that the farther away one is from the path of totality, the less that eclipse effect will actually be viewable. Stanley, Idaho, for example, is in the path, so it will experience the totality of the eclipse. Los Angelinos, who are just outside the band, will still get to see around 60 percent of the sun eclipsed, and those watching from the Panama Canal will witness 25 percent of the sun eclipsed.

Which means if you’re thwarted by fate — or even apathy — you’ll be in the “path of partial-totality.” Meaning you’ll only miss out on the prospect of a total solar eclipse, a cosmic event that has impacted humans for thousands of years.

A bit of South America will also be privy to the event, with northern nations like Columbia and Venezuela experiencing a just a sliver of the sun eclipsed.

For those that want the total eclipse experience for the longest amount of time, you’ll need to journey to the town of Carbondale, Illinois, where the sun will be fully shrouded for two minutes and 40 seconds.

NASA has helpfully provided an eclipse map for those that want to ensure that they’re standing, sitting, or lying in the right spot.

And as always, if you plan stare skyward and watch the moon invade the sun, it would be wise to don some hip, good-for-you solar glasses.