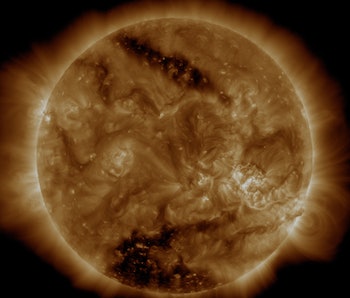 We all know that staring at the sun is profoundly stupid, but during this summer’s total solar eclipse you might be tempted to sneak a glance at the sun as it is incrementally blocked by the moon — as might millions of others.

According to NASA, four companies make certifiable solar viewers, also known as eclipse glasses: Rainbow Symphony, American Paper Optics, Thousand Oaks Optical, and TSE 17. They look similar to 3D glasses you might put on in a movie theater, and they’re all comparable in quality.

The dark, film-like material contains a thin layer of metal, like aluminum or chromium, which weakens solar rays as they pass through, enabling you to safely view that great orange circle in the sky as it’s progressively covered by an ominous black mass — the moon.

It’s not difficult to find a pair of fly solar shades. Online, a 25-pack of these essential eclipse-viewing tools run for around $21. At under a buck per solar viewer, this seems like a prudent investment for your eyeballs. But because these glasses are pretty cheap, NASA makes the sound point that one should inspect them for tears and other damage before use.

While many of us will don solar viewers on August 21, 2017, the surest way to protect your eyes is to view the eclipse indirectly. There’s not any one way to do this, but the basic idea is to project the sun (and what’s happening to it) onto paper or cardboard, like with a pinhole projector.

There is, however, one time in which you can safely (and temporarily) gaze at the sun this summer. If you travel into the 70-ish mile-wide “path of totality,” where the moon will completely obstruct the sun for up to 2 minutes and 40 seconds, you can stare up at our blindingly radiant star. Of course, you won’t actually be looking into the sun, but you’ll be able see the sun’s corona, or outer atmosphere, around the outline of the moon — which is its own grand spectacle — and one that won’t blind you.

More like this
Science
Feb. 6, 2023
How the Webb Telescope is Rewriting What We Know About the Early Universe, One Galaxy at a Time
By Doris Elín Urrutia
Science
Feb. 4, 2023
Astronomers May Be on the Cusp of a “Potentially Revolutionary” Cosmological Breakthrough
By Universe Today and Matt Williams
Science
Feb. 2, 2023
Exclusive: NASA Explains How the Voyager Missions Could Live Until 2035
By Kiona Smith
LEARN SOMETHING NEW EVERY DAY.
Related Tags
Share: