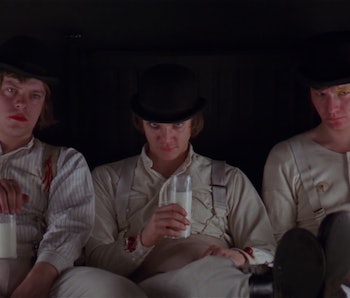 Anthony Burgess was a gifted linguist in addition to being the author of the 1962 dystopian classic A Clockwork Orange, and his fascination with lexica found its way into the novel through “Nadsat,” the slang language spoken by his teenage characters. Penguin Books commissioned Burgess to write a slang dictionary in 1965, but he never finished the manuscript, and historians have always assumed that it was lost — until now.

The missing dictionary was recently discovered among Burgess’ archived possessions in Manchester, obscured beneath some bedsheets. Researchers found 886 slips of 6x4 papers inscribed with the entries he had completed.

Burgess stopped composing the dictionary after only a few letters, but still managed to write some really interesting stuff. The Guardian has shared a sample of the entries under “A”:

“Abdabs (the screaming): Fit of nerves, attack of delirium tremens, or other uncontrollable emotional crisis. Perhaps imitative of spasm of the jaw, with short, sharp screams.

Abdicate: In poker, to withdraw from the game, forfeiting all money or chips put in the pot.

Abortion: Anything ugly, ill-shapen, or generally detestable: ‘You look a right bloody abortion, dressed like that’; ‘a nasty little abortion of a film’ (Australian in origin).

Abyssinia: I’ll be seeing you. A valediction that started during the Italo-Abyssinian war. Obsolete, but so Joyceanly satisfying that it is sometimes hard to resist.

Accidental(ly) on purpose: Deliberately, but with the appearance of accident: ‘So I put me hand on her knee, see, sort of accidental on purpose.’ (Literary locus classicus: Elmer Rice’s The Adding Machine, 1923.)

Arse: I need not define. The taboo is gradually being broken so that plays on the stage and on radio and television introduce the term with no protest. The American Random House Dictionary … is still shy of it, however, though not of the American colloquialism ass. Arse is a noble word; ass is a vulgarism.”

The descriptions are about what you’d expect from Burgess: intricate and shocking.

It’s been 55 years since the publication of A Clockwork Orange and 46 years since the release of Stanley Kubrick’s film adaptation, but the cult adoration for Burgess and his story persists. It’s nice to know that it’s “noble” to call hyper-zealous fans pains in the arse.

More like this
Culture
Feb. 5, 2023
Peter Jackson’s Most Unnecessary Movie Fixed the Biggest Problem with The Hobbit
By Ryan Britt
Culture
Feb. 1, 2023
If The Last of Us Made You Bawl Your Eyes Out, You Need to Revisit This Zombie Rom-Com
By Mónica Marie Zorrilla
Culture
Feb. 4, 2023
A Failed Sci-Fi Sequel Stunt Accidentally Set the Standard for the Forgettable Netflix Movie
By Hoai-Tran Bui
LEARN SOMETHING NEW EVERY DAY.
Related Tags
Share: