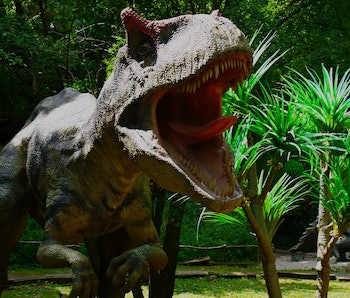 In middle-of-nowhere Utah, there is a piece of earth more dense with theropod dinosaur bones from the Jurassic period than anywhere else, populated mostly by a predator called Allosaurus that looks like a T. rex and rivaled it in size. This quarry is the closest thing on this planet to an literal Jurassic Park, and scientists are unraveling a decades-long mystery about how it came to be.

Research published Monday in PeerJ used two new lines of evidence to conclude that inhabitants of the Cleveland-Lloyd Dinosaur Quarry didn’t die all at once, but slowly accumulated over many years in a pond that was sometimes flooded, sometimes dry.

“Animals died, began to decompose, and washed into an ephemeral pond where they continued to decompose and deposit,” lead author Joseph Peterson, a paleontologist with the University of Wisconsin-Oshkosh, tells Inverse in an email. “However, there is evidence that this pond went through periodic drying events, causing some of the bones to weather and break apart, followed by another flooding event. This would help the fossils stay preserved over millions of years.”

The climate in Utah would have been monsoonal 147 million years ago, with a very wet season and a relatively dry one. If Peterson and colleagues are right, the spot where the quarry now sits was once a depression in the landscape beyond a river bank, which during the rainy season would occasionally flood over. The water would carry rotting dinosaur carcasses with it, and now and then one would become trapped in this poorly-drained pond when the floods receded. The result would be a puddle of decomposing flesh that would slowly evaporate until the next rains came to wash away the stinky mess.

The bones are jumbled and tattered — many are eroded on the tops, which suggested to the researchers that a layer of bone may have poked out from the dried pond, where they suffered the elements until another flood came along and covered them again with a new layer of sediment.

This version of events will compete with an earlier telling, in which this quarry was once a predator trap — a tar pit or something like it, where a dinosaur would get stuck and then act as unwitting bait for nearby allosaurs to fall into the same sticky hole. But Peterson and colleagues found evidence in the chemical composition and physical makeup of small bone fragments that suggests these beasts died elsewhere and were transported to this place half-decomposed.

Which leaves a very large unanswered question. Why are allosaurs so overrepresented here? They make up more than half of the animals found in the quarry to date, and yet this apex predator surely would have been relatively rare on Utah’s Jurassic landscape.

Peterson doesn’t have a good answer, yet, except to say that his version of events allows for the fact that not all of these allosaurus were alive at the same place and time. But he’s working on it.

“There are many questions still unanswered about the quarry,” he says. “Why so many carnivores? What is the origin of the heavy metal chemical signature we see at the quarry? Are there differences in the sediments throughout the bone layer? All of these will be explored in our future work at the quarry by careful excavation and data collection. Stay tuned… there is a lot more to come!”