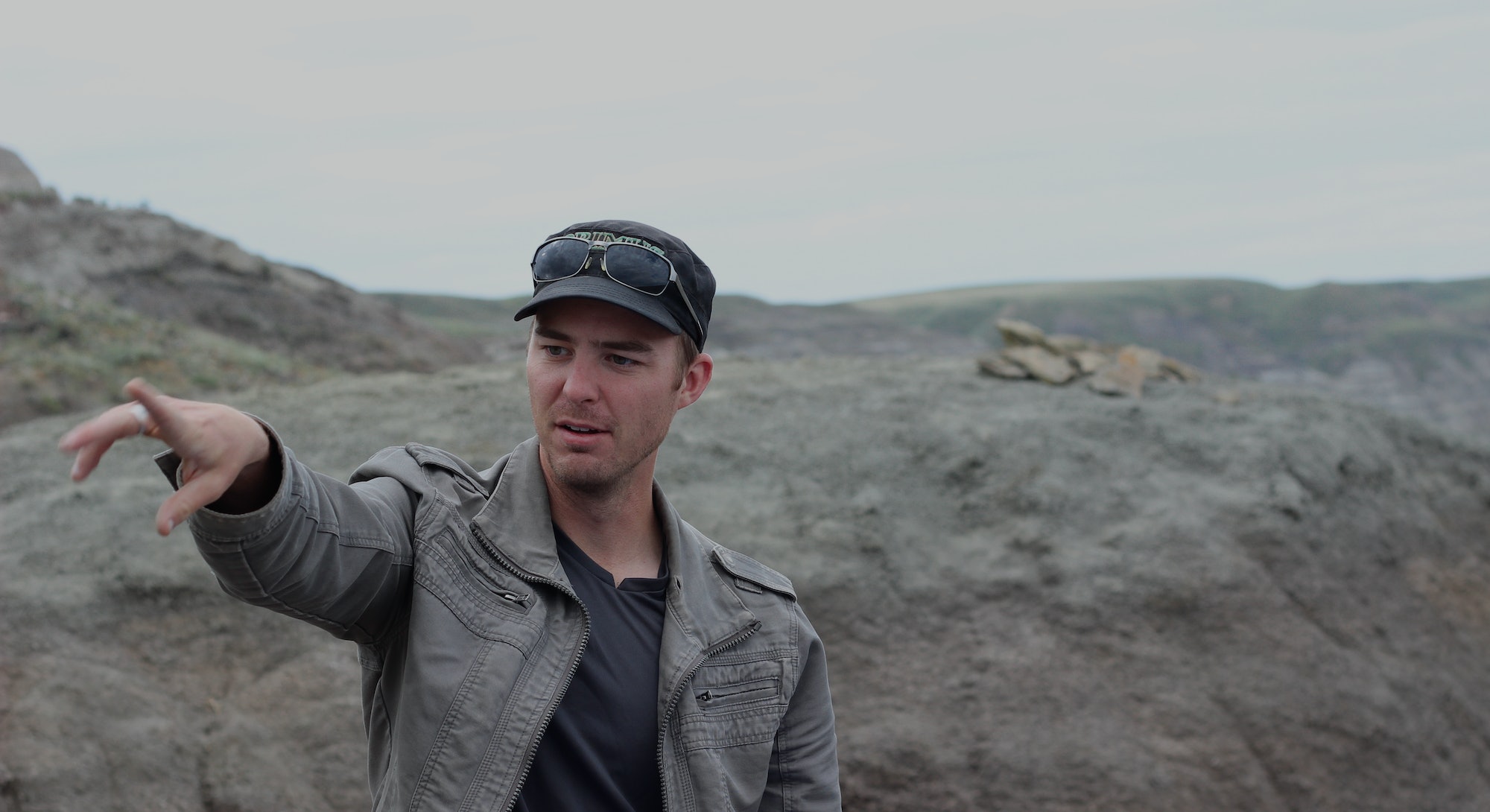 “I picture it as just being pandemonium — almost like the sinking of the Titanic,” says Jordan Mallon, research paleontologist with the Canadian Museum of Nature. “There would have been panic. There would have been a lot of splashing. There would have been honks and hoots and hollers for help, and probably maybe even some nasty tyrannosaurs waiting not far from the shoreline, waiting to sink their teeth into this giant smorgasbord of dinosaur flesh.”

Mallon is standing in a wide river valley in Alberta, Canada, on the very spot where 76 million years ago a herd of horned dinosaurs drowned in a massive flood. The South Saskatchewan River, which cuts into the earth, is both destroyer and revealer. There is a layer in the steep valley wall, about a foot thick, that is dense with rusty colored Centrosaurus apertus bones. They poke out from the side of the earth as erosion peels away the softer sandstone.

Dressed in casual outdoor gear, Mallon leans toward the cool side of nerdy. He’s outgoing and keen — clearly enthralled by his work, and eager to share. He’s also plainly energized from a tough field work season excavating the rock on top of the exposed, eroding edge of one of the bonebeds. The work on this spot began in 1959, well before he was born, when Wann Langston Jr., a predecessor at the Canadian Museum of Nature, discovered some horned dinosaur bones. Some 51 years after that, David Eberth, a research paleontologist at the Royal Tyrrell Museum in Drumheller, Alberta, described the graveyard in the academic literature for the first time. Today, what Eberth named the “Hilda mega-bonebed” as a tribute to the nearby village of Hilda (population: 37) is becoming Mallon’s turf. It’s an inheritance he’s proud of and a responsibility he takes seriously.

Part of Mallon’s work is to further shore up Eberth’s hypothesis that these centrosaurs died all at once, but he’s also brimming with questions of his own. As Eberth — who shares with Mallon a commitment to a school of paleontology that values information about how animals used to live over the discovery of new species — nears the end of his career, Mallon is just getting started.

“We’re really excited to have that crew out there,” says Eberth.

Centrosaurs were social animals and vegetarians, maybe 2.75 tons apiece. They came equipped with a large frill fanning back over their heads and looked like triceratops, but without the long upper horns and with a much larger horn over the nose. There are several bonebeds here thick with their remains. A survey led by Eberth in 1997 counted 14 individual bonebeds in this layer of rock on both sides of the river valley. The remains of the centrosaur herd, their numbers in the thousands, were scattered over an area of a square mile or more.

“We have a beautiful record of large dinosaurs, multi-ton dinosaurs being preserved as articulated skeletons, but when we get down to the small animals, we find that they’re not as well preserved, and they’re not as well represented in the fossil record. We’ve always puzzled over that,” says Eberth. In 2010 he put forward the case that all of these apparently separate bonebeds actually represent evidence of a single natural disaster.

The previous theory for the origin of these sorts of bonebeds was that the centrosaurs had been caught in a river crossing, like a herd of caribou panicked by a swift current. But, over the years, Eberth developed a theory based on geological analysis: The bonebeds were not formed by sedimentation at the bottom of river channels, but on the normally dry land between them. If the centrosaur flock wasn’t near a river when it met its end, he concluded, they must have been caught in a very mighty flood.

These centrosaurs died maybe 30-45 miles inland from the coast of the Western Interior Seaway — an ancient ocean that once divided North America from north to south. At the time, the local climate was monsoonal — very wet and stormy for part of the year, and much drier and quieter the rest. When a tropical storm rolled in, the sea would surge up, acting like a dam to prevent rivers from draining. As heavy rains fell, banks would overflow. In even an average monsoon season large swaths of land would flood; a big storm could swamp the landscape 100 miles inland, or more.

“If you were to fly over it in an airplane and look down, you would have seen treetops sticking out of the water, you’d have seen animals bunched together wherever there’s a little bit of dry land,” says Eberth. “But for the most part you’d see a lot of devastation.”

Under these conditions, it’s no wonder Alberta’s dinosaur record favors the rather large. “The smaller animals, they find ways to survive,” Eberth says. “They’re either swimming or they’re flying away, or they’re climbing up trees — you can think of a million different ways for these things to survive. But if you’re a big animal, you’re done; you’re toast. There’s nowhere for you to go.”

When the floods receded, the remains of this great herd were not swept away by rivers, but left in great puddles on the open plain. “All of a sudden, it’s like ringing the dinner bell,” says Eberth. “You’ve got these carcasses rotting; the scavengers that come back into the area after the flood are going to make a beeline for this free lunch.”

But another storm must have come not too long behind, because although these bones are torn apart and trampled, they were buried in sediment before they were lost to the elements entirely. It is thanks to this chaotic yet regular flooding — as seen in places like Bangladesh today — that scientists like Mallon have such an incredible trove of material to guide their curiosity.

“You’ve got people like Jordan — the next generation as it were — coming up and they go into these localities that we were excited about and they come at it from a new point of view,” Eberth says. “They take the work that we’ve done — my generation — and as well they should they take it for granted and they go, ‘OK, we know that; now, what questions can we ask? What can we explore? What things can we go after, now, based on what we know so far?’”

Mallon has been making the trek across the country from Canada’s capital city of Ottawa each summer since 2013 to pick away at this enormous project. The methods of paleontology field work have changed little in two centuries, and its implements range from crude to fine. Mallon’s personal tool kit includes a shovel, a pickaxe, a mason’s hammer, a paring knife, a flathead screwdriver, a dental pick, and a soft, round paintbrush.

Mallon carries his gear in a red hiking pack from the nearest access road, along a trampled cow path across a hot, dry, densely mosquitoed plain. After maybe half a mile, the flat gives way to the loose sandstones of the badland river valley. The Alberta Badlands are famously treacherous — full of sinkholes, quicksand, rattlesnakes, scorpions, cacti, and mosquitos. The steep river banks are covered in a soft sediment that gives way unexpectedly underfoot. Even a sprinkle of rain turns the bentonite clay to a coat of slippery mud. But none of this seems to bother Mallon, who picks his way through the unfriendly terrain to his dig site.

Once there, his first job is remove the rock and soil on top of the bonebed. Movements get more precise and tools get more delicate towards the layer of interest; the last step involves brushing the last of the sandstone dust off the reddish bone surface. The bone crumbles easily, requiring a glue and acetone solution squirted from a chemist’s bottle to bind the fragile fossil.

Getting the material out of the rock is another tricky endeavor. It must be wrapped in plaster casting for transport back to the lab. But the rock is dense with bone, so it becomes a challenge to pull out the fossil you want without sacrificing others nearby — sometimes you need to lose a rib to save a femur.

“At some point you need to start cracking bones,” says Mallon.

He and his team have cleared the earth to the top level of the bonebed over an area of maybe four square yards. This single bonebed could cover 400 square yards, and contain 100 or more animals, he guesses.

It’s slow progress and tedious work — and that’s part of its value. “Very rarely are we able to get sample sizes that large in the dinosaur fossil record,” he says. A large collection of bones from the same species known to have lived in the same herd at the same place and time is an extraordinary thing. A large data set will allow Mallon to answer questions paleontologists don’t usually get to ask. How did juvenile centrosaurs develop over time and mature into adults? What was their relative abundance in a herd? Did males and females look different?

“You could make a career out here,” says Mallon.

You could make many, says Eberth.

“The Hilda site is a really important single piece of the puzzle, and the game is to rebuild dinosaur environments and really understand what these animals are capable of. No matter how much you know, you’re always going to ask new questions, and more questions, that are slightly out of reach of the past generation. It’s within our reach, but it’s going to take multiple careers to get a clear picture.”