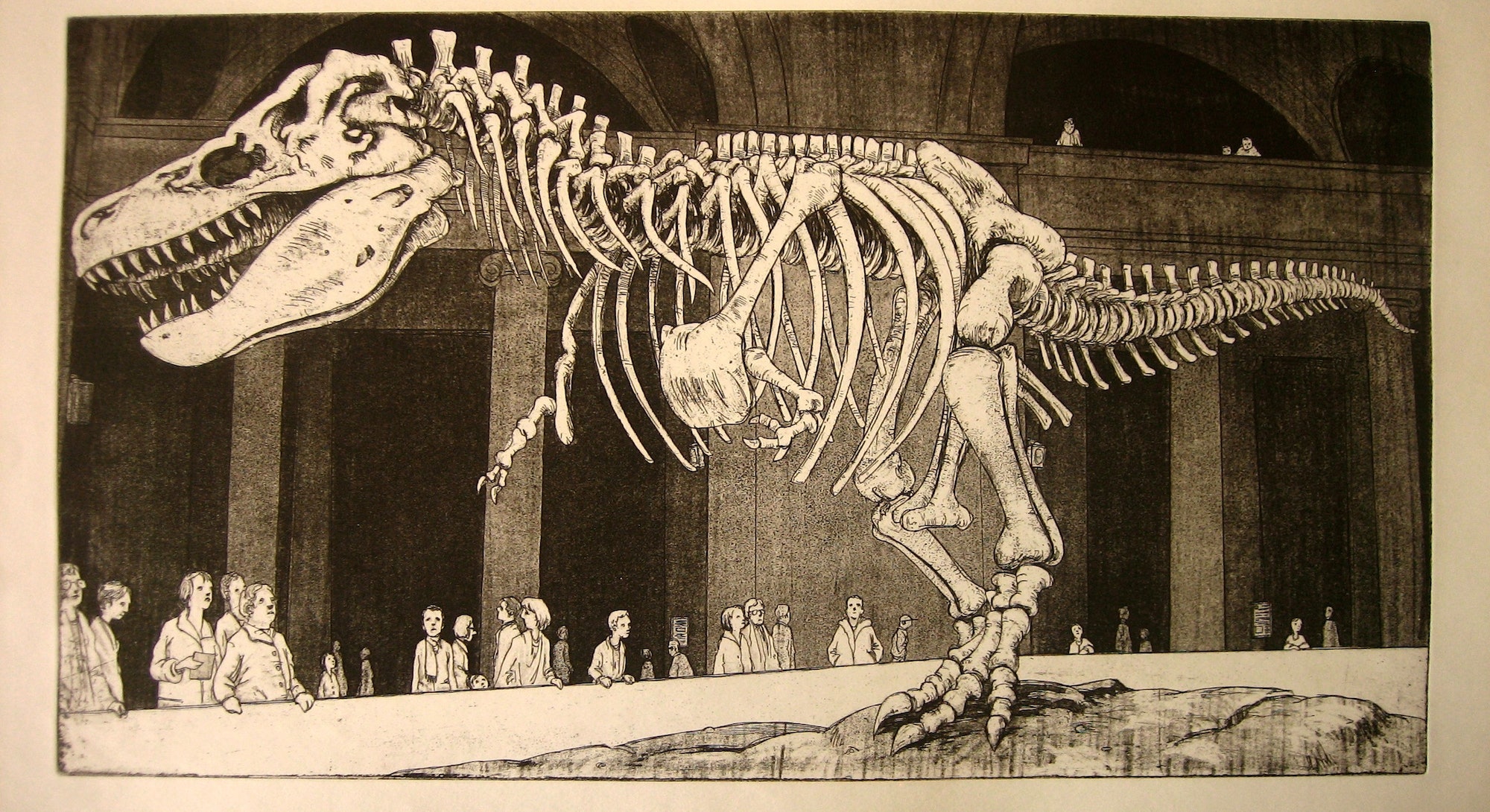 Sue, the largest, most complete Tyrannosaurus rex in the world, lives at the Field Museum in Chicago. The specimen was named by Peter Larson, who founded the Black Hills Institute of Geological Research and led the excavation team that uncovered the fossil, to honor Sue Hendrickson, who made the initial discovery. Larson chose the name not only because he wanted to give credit where it was due, but also because of the massive size of the fossils and the beefy limb bones, traits he claims are indicative of female tyrannosaurs. That’s just a theory and Larson will admit as much, but he’s pretty damn sure he’s right, pretty damn sure Sue is a female, and a bit dug in now that another paleontologist is positing different ideas.

“I’m pretty convinced that this hypothesis is correct,” says Larson, who has likely spent more time with T. rex bones than anyone else on Earth but remains philosophical about such things.

Jordan Mallon, a paleontologist with the Canadian Museum of Nature, is the man who would take away Sue’s gender identity. And the scope of his paleontological mini uprising is actually significant: He’s asserting that more than four decades worth of research describing how to tell male and female dinosaurs apart based on the size and shape of their bones is wrong. He is, in essence, saying that the received wisdom on these issues is crap.

“I’ve crunched the data,” he tells Inverse, “and the problem with a lot of the previous studies is they just haven’t done the right statistics, if they’ve done any at all.”

Mallon’s research, forthcoming in the journal Paleobiology, reviews evidence for sexual dimorphism (the technical terms for different body shapes in males and females that typically result from sexual selection) in nine species of dinosaur. In each case, he subjects the data to statistical tests and finds that evidence does not support previous conclusions of sexual dimorphism. If he’s right, they’ll have to rewrite a bunch of textbooks.

In order to understand Mallon’s critiques, it’s important to understand that there are instances where the sex of a particular dinosaur fossil can be determined with relative certainty. On rare occasions, fossils are found with eggs still inside the pelvis. In other cases, scientists have found medullary bone, a special spongy bone from which pregnant female birds draw stored calcium for building eggshells. Mallon recognizes all this and doesn’t take issue with the idea that there were probably differences between male and female dinosaurs.

“I suspect dinosaurs probably were sexually dimorphic,” he says. “But the point is that we just don’t have enough fossil evidence to show it yet.”

Birds alive today (technically dinosaurs shrunken and beaked by 65 million years of evolution) show many examples of sexual dimorphism. The peacock and peahen are only the most obvious examples. And crocodiles, dinosaurs’ next closest relative, are also highly dimorphic, with males growing considerably larger than females.

But proving dimorphism in an extinct animal from a scattered fossil record is a tricky proposition. Not only do you need specimens from many individuals, you need to have the exact same bone across each of those animals. “You don’t want to compare a left femur to a right humerus,” says Mallon. Ideally, you’re also controlling for age, since comparing an adolescent with an adult will also skew your results.

The classic, textbook example of sexual dimorphism in dinosaurs comes from Protoceratops andrewsi, a small, early cousin of Triceratops and other ceratopsians. “That has long been held up as being not just the first well-supported example of sexual dimorphism in a dinosaur, but also one of the best examples,” says Mallon. Way back in 1976, prolific paleontologist Peter Dodson took measurements from 24 Protoceratops skulls and concluded that the shape of the frills on their heads was an indication of sex. The males, he argued, had a broader, more erect frill and a bump over the nose, while the females had a narrower, lower frill and a less distinct bump.

But Mallon’s own work found that the data didn’t support that conclusion. He’s not alone on that one either. Last year Leonardo Maiorino and colleagues analyzed the measurements of 29 Protoceratops andrewsi skulls and found no good evidence of dimorphism. The study, published in PLOS ONE, concluded that differences in skull shape were more likely the result of age differences or normal variation within the population.

This is a common mistake, says Mallon. Researchers often confuse individual variation for dimorphism. They take their measurements, make a scatter plot, and eyeball a line down the middle. A basic statistical test will conclude that the specimens on the left are significantly different from those on the right, but that doesn’t make them dimorphic. True dimorphism means two distinct morphs, clearly separated from one another, not a smooth gradation of characteristics along a spectrum.

The worst offenders are researchers who conclude sex based off just two individuals, which is just bananas. Any two individuals of a species will have differences between them; to conclude that therefore they must be of different sexes has no grounding.

“You just can’t make those conclusions on the basis of two specimens,” Mallon says. “You need a population of animals, and you need to be able to assess that population statistically.”

As for Larson and his T. rexes, he’s working on it. He’s been collaborating with Mallon to better support his theory of robust female bones and slender male bones with more data and better statistics. “You can see it visually, and I figure if you can see it visually you ought to be able to measure it,” says Larson. (Mallon, who has seen the measurements, says they fall along a normal distribution: “There’s no break in the scatter, it’s all just one gradient of variation.”)

Part of Larson’s plan is to find T. rex specimens with medullary bone, in addition to one that has been found so far, which would make it potentially possible to come to a conclusion about the shape and size of typical females. He’s also looking at collections of skeletons from birds of prey of known gender and age, in the hopes that they might also show this pattern and shore up the hypothesis by analogy.

He’s open to the possibility that he might still be wrong, but he’s pretty sure he’s not. “I think that I’m correct, that we can tell male from female, and I think I know which one is which. But I want to prove it — thinking you’re correct isn’t good enough.”

On that last point, Mallon would agree. And you can bet he’ll be holding Larson to it.