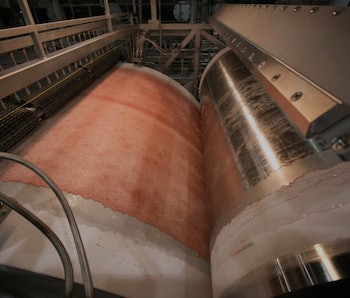 There’s a multibillion dollar defamation trial about to go down in Elk Point, South Dakota over a meat producer, Beef Products Inc, and the ABC News Network dating back to 2012, when ABC called BPI’s meat “pink slime.”

BPI’s signature product, lean finely textured beef (LFTB), is a ground beef made from beef chunks and trimmings of larger cuts that is condensed and treated with ammonium hydroxide to kill off diseases like E. coli. As part of the process, the meat is heated up and spun in a centrifuge, which rapidly rotates the meat until the fat is separated from the lean product, making it 94 to 97 percent lean meat. The product is then used as filler in ground beef products.

In the broadcast from March 2012, ABC correspondent Jim Avila said, “Beef trimmings that were once used only in dog food and cooking oil, are now sprayed with ammonia to make them safe to eat, and then added to most ground beef as a cheaper filler.”

ABC also repeatedly referred to the meat, which is paper-thin and translucent, as pink slime, using a term coined by the former USDA scientist Gerald Zirnstein in a 2002 email to a colleague.

BPI said the claims ABC made were incredibly damaging to business, causing it to shut down three of four total factories and leading to an 80 percent loss in revenue. BPI is citing those loses in filing a defamation suit that could be worth up to $5.7 billion

“They ignored the proper name,” BPI’s lawyer, Dan Webb said in court. “When you have a major news organization that is calling the product slime, witnesses will say they can’t imagine anything worse. It connotes something disgusting, inedible.”

ABC lawyer Dane Butswinkas has countered that pink slime was a common term already and that BPI had started losing major clients before the broadcast due to complaints about the product.

For BPI to win the suit, it will have to prove that ABC’s reporters acted with “actual malice” to harm the company.

Whatever happens in the suit, LFTB is still in a lot of food. Although the amount of U.S. ground beef containing it dropped from 70 percent to five percent in 2013, the controversial additive has quietly made a comeback. In a Wall Street Journal report BPI said in 2014 that its LFTB production had doubled since the lows, and Cargill said its own version was returning to the level seen before the backlash.

The FDA and USDA, who jointly approved the meat for consumption in 2001, have also disputed suggestions that the meat is unsafe. “The process used to produce LFTB is safe and has been used for a very long time,” said Elisabeth Hagen, Secretary for Food Safety, in a response to the controversy in 2012. “And adding LFTB to ground beef does not make that ground beef any less safe to consume.”

The trial is expected to continue through the end of July.

The Future of Fake Meat Just Got an Unlikely Investor

The Cost of a Lab-Grown Burger Has Dropped Dramatically

The Complicated Science of Why You Get the Meat Sweats