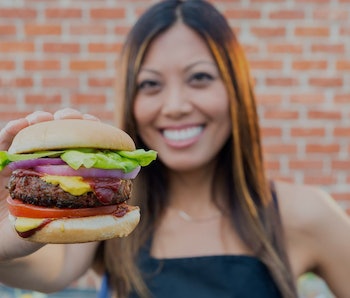 The scientists at Beyond Meat think they’ve created something that tastes, feels, and even bleeds like a hamburger but doesn’t carry all the problems associated with meat production. It’s called the Beyond Burger, and even though it’s made entirely from plants, Whole Foods began stocking it in the meat aisle in June. Tyson Foods hopes it’s the future of fake meat.

Tyson announced Monday that it had acquired a five percent stake in Beyond Meat. This came as a shock: Tyson is the world’s largest processor of cows, chickens, and pigs. Its decision to help a company whose very name advertises its desire to wean the world off animal flesh must not have come easy.

Beyond Meat has long positioned itself as a tech company focused on meat alternatives. Kleiner Perkins invested in the company, and so did Obvious, the investment firm of Twitter co-founder Ev Williams. The company also uses high-tech processes to synthesize the different building blocks of food to cut out the middle man — by which I mean cow, chicken, or pig — of meat production. So what can it gain by working with one of the world’s largest meat companies?

In a Facebook post about the investment in which its customers said it was making a mistake by partnering up with Tyson Foods, Beyond Meat explains that it plans to use its unlikely investor’s reach to make things like Beyond Burger more widely available. (Tyson, for its part, said that it invested in Beyond Meat so it could explore a “fast-growing segment of the protein market” without changing its own focus.)

“Tyson Foods and Beyond Meat share an aspiration to find innovative ways to sustainably feed the world’s growing population,” the Beyond Meat Facebook page wrote to a commenting customer. “Tyson touches 2 out of 5 plates in America, they can help us make the type of change that we want to make in this world at a more rapid pace and help increase our distribution [which means] more Beyond Burgers for everyone.” Beyond Meat, then, is using Tyson Foods’s own money to disrupt its business.

The time could be right for this shift. Companies are learning how to “bioprint” meat and Dutch researchers want lab-grown meat on the market by 2020. At the same time, real meat has been rocked by scandals, like “ground beef” containing horse flesh and meat from other animals.

The problem is that many people like meat. It’s delicious! And a long history of meat alternatives that never quite manage to feel or taste like the real thing have likely soured people on switching away from what Tyson delicately calls “animal protein.” Beyond Meat — and the Beyond Burger — is specifically meant to change people’s minds by being more true-to-the-source than its predecessors. That’s why the company and Tyson Foods coordinated this surprising investment.

The future of fake meat looks (and hopefully tastes) a lot like meat’s present. Eventually they might have to rename the meat aisle to the protein aisle; this investment shows that Beyond Meat and Tyson Foods are preparing for that shift. The world is ready for people to eat less meat — doing so could help combat climate change — and now people might be ready to switch from animal flesh to plant protein.

More like this
Science
Jan. 21, 2023
Can spicy foods cure colds? A neuroscientist reveals the encouraging truth
By Elana Spivack
Science
16 hours ago
Clean energy farms may endanger birds and bats — but the remains can reveal a solution
By Emma Foehringer Merchant and Undark
Science
12 hours ago
Are coyotes dangerous to dogs and cats? Here’s how to keep your pets safe
By Tara Yarlagadda
LEARN SOMETHING NEW EVERY DAY.
Related Tags
Share: