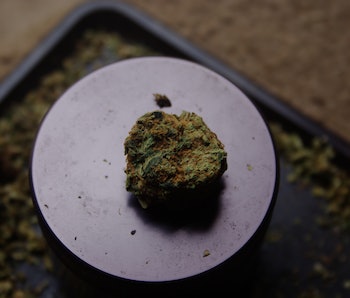 Back in 1985, the U.S. Food & Drug Administration (FDA) approved a synthetic form of marijuana called Marinol to help cancer patients cope with the nausea caused by their chemotherapy treatments. The drug, also known as dronabinol, is still being studied today. In May, it was found to help reduce the amount of seizures in people with severe cases of epilepsy (though it also gave them diarrhea.)

It has also been used to bolster the appetite of people fighting anorexia, both as a standalone disorder or as a symptom of treatments for HIV.

Marinol is a synthetic, artificially-developed form of delta-9 THC, the active ingredient in jazz cabbage that is most responsible for getting you high.

Many criticize Marinol’s existence: Some point out to the veritable money landfall to be made for pharmaceutical companies that can develop synthetic THC when natural marijuana is illegal.

Either way, the drug is still kicking, and more potential uses are being investigated all the time. This use of synthetic weed could remove some barriers that still prevent scientists from conducting real marijuana research. According to clinicaltrials.gov, a database of every medical experiment conducted, there are currently 41 ongoing studies on Marinol that are either recruiting participants or will begin doing so soon.

The science behind these studies is surprisingly solid. Many clinical trials are plagued by endpoint changes, where the researchers or pharmaceutical company behind the experiment change things around while the study is still ongoing. A quick scan of some of the Marinol studies reveals very few of these changes, meaning that the claims made by scientists about the drugs are generally backed up by reliable evidence.

It’s important to remember that Marinol is still essentially pot, so if you are prescribed the drug then you definitely shouldn’t drive or do anything that you wouldn’t do while high.