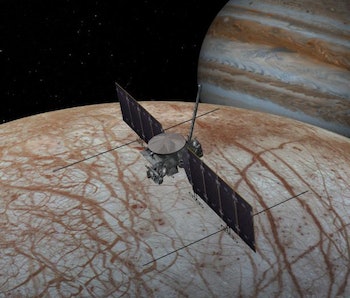 Venturing off into space costs a pretty penny. That’s why NASA, in 1972, quit sending astronauts on joyrides to the moon. But a nation-wide survey over 40 years in the making reveals that Americans don’t mind ponying up the cash for extraterrestrial exploration — whether its scouring the red Martian desert for hints of life, or peering down into Jupiter’s roiling clouds.

Beginning in 1972, when the last astronauts returned home from the moon, the independent research organization NORC at the University of Chicago began surveying Americans in every state, asking them, “Do you think the nation is spending enough on space exploration?” This was one of hundreds of questions asked as part of the General Social Survey, an ambitious endeavor to track the nation’s attitudes and beliefs — which continues today. The survey’s data for this specific question can been seen in the graph below, which was created by Overflow Data, a site that turns data into clear visualizations.

Tom W. Smith, the director of the General Social Survey, suggests that the media coverage around commercial space programs, like SpaceX, might be a significant factor for why so many Americans want the government to spend more on space.

There are few space events that stir more excitement and media attention than Elon Musk’s reusable rockets, which are now landing back on Earth after blasting into space. “The more coverage something is getting, that would be a major factor in shaping what people think about it,” says Smith. Private spaceflight, notes Smith, might imply that space exploration money is being spent more efficiently than before, when the notoriously bureaucratic federal government held nearly exclusive reign over space rocketry.

In the 1980s, the Soviets invaded Afghanistan and Smith observed a similar shift in the nation’s attitudes. “When the Soviets were on the march, support for defense spending doubled,” says Smith.

Media attention is undoubtedly influential, but American’s acceptance of space spending could also be motivated by a growing cosmic intrigue. The deeper humans plunge into the void, the more curiosities we find. Saturn’s moon Enceladus spews geysers of water vapor and ice (and whatever else) into space, while Jupiter’s moon Europa tempts scientists with what might lie under its cracked icy crust — perhaps a salty sea?

Whatever the reasons, if Americans believe that the government is spending less on space exploration, they’re absolutely right.

During the rousing 1960’s space race to the moon, NASA was swimming in money. In the mid to late 1960s, NASA was spending well over four percent of taxpayer dollars. But by 1980, this dipped to one percent of the budget, and today it’s a measly half of one percent. This, of course, isn’t too measly — it’s over $19 billion. Nearly a quarter of this (around $4.5 billion) was tagged for space exploration in 2016, which includes the development of NASA’s giant new rocket – the Space Launch System – which will launch Mars(https://www.inverse.com/topic/mars)-bound astronauts into space.

This expensive venture won’t take place until the 2030s, but if recent trends continue, Americans may be willing to shell out more money to give astronauts the chance to romp around the Martian desert.

More like this
Science
Sep. 30, 2022
SpaceX and NASA just unveiled an ambitious plan to save the Hubble
By Doris Elín Urrutia
Science
8 hours ago
NASA Crew-5 launch: Timeline, how to watch this historic ISS mission
By Harry Stoltz
Science
10 minutes ago
Elon Musk hints at a first Starship orbital flight date — and its quite soon
By LAURENCE TOGNETTI and Universe Today
Related Tags
Share: