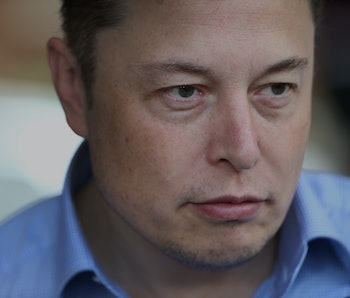 While the speech on the White House lawn was still happening Thursday, SpaceX and Tesla CEO Elon Musk, who said a day earlier that he would depart President Donald Trump’s advisory councils if the U.S. backed out of the Paris Agreement to curb greenhouse emissions, made good on his word.

“Am departing presidential councils,” Musk announced on his Twitter account. “Climate change is real. Leaving Paris is not good for America or the world.”

He later noted that China, the world’s fastest-growing polluter but also the most aggressive in developing clean energy, was focused on creating America-sized amounts of it: “Under Paris deal, China committed to produce as much clean electricity by 2030 as the U.S. does from all sources today,” Musk tweeted. And then he tweeted later, “India commits to sell only electric cars by 2030. It is already the largest market for solar power.”

Musk, along with other CEO’s, had been a member of the Trump administration’s business and economic advisory councils, visiting Washington, D.C., about once a month to meet with the president. On Wednesday, Musk said he would quit the councils if Trump backed out of the Paris Agreement. Musk is an ardent supporter of environmentally friendly technology, most notably with Tesla, his electric car company that also has a new solar panel and power storage business.

Meanwhile, Trump, in a meandering address that appeared to stick to script at some points and offer curious, characteristically Trump impressions at others, said the U.S. government would renegotiate the terms of its role in the Paris Agreement.

The Paris Agreement was hammered out in December 2015, with participating countries — 195 of them — agreeing to work together on limiting carbon emissions as a way to limit global temperatures to rising 2 degrees Celsius (3.6 degrees Fahrenheit) above pre-industrial levels. Each country would be responsible for coming with its own plan on how to do this, with the world’s biggest polluters — the United States, China, and India — facing the most aggressive plans. The Paris Agreement was signed by former President Barack Obama in September 2016.

“This agreement is less about the climate and more about other countries gaining a financial advantage over the United States,” Trump contended on Thursday. “The rest of the world applauded when we signed the Paris Agreement. They went ‘Wow.’ They were so happy, for the simple reason that it put our country, the United States of America, which we all love, at a very, very big economic disadvantage.”