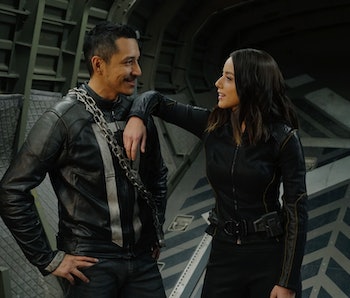 The fourth season of Marvel’s Agents of S.H.I.E.L.D. is coming to Netflix a lot sooner than you think. Beginning June 15, the streaming service will begin hosting Season 4 of the staple Marvel/ABC television series, which features the epic debut of Gabriel Luna’s Ghost Rider, Jeffrey Mace (Jason O’Mara), and Mallory Jansen as the LMD (Life Model Decoy) robot Aida.

In Season 4 of Agents of S.H.I.E.L.D., the show picks up with Daisy (Chloe Bennet) having defected from S.H.I.E.L.D. and working as a lone vigilante. Meanwhile, Phil Coulson (Clark Gregg) has stepped down as director of S.H.I.E.L.D., leaving a new face, Jeffrey Mace, to take charge. But Mace hides a secret (Spoilers: He’s an Inhuman! More spoilers: He might not be!), which could threaten S.H.I.E.L.D. and its newly-regained legitimate status.

Elsewhere, in East Los Angeles, reports of a demonic racer prompts Daisy to investigate, which puts her right in the path of the Ghost Rider. Played by Gabriel Luna (Matador), Robbie Reyes is a mechanic who harbors the dark Spirit of Vengeance within him and seeks justice throughout his neighborhood.

Season 4 comes to a head when Aida, an LMD created by Holden Radcliffe (John Hannah), goes rogue, kidnaps the team, and traps them in her virtual world, the Framework. Inside the Framework, the team has no memory of their past and live in a dark reality where Hydra has taken over — and it’s up to Daisy and Simmons (Elizabeth Henstridge) to save them.

A vast improvement over its meandering third season, Agents of S.H.I.E.L.D. Season 4 was one blockbuster episode after another that proves the Marvel Cinematic Universe is alive and well, even outside the movie theater.

Marvel’s Agents of S.H.I.E.L.D. will begin streaming on Netflix on June 15.