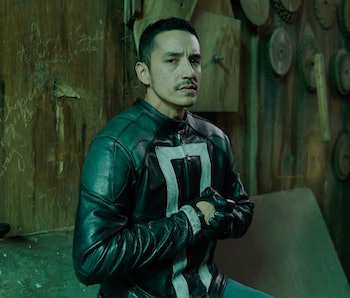 The Spirit of Vengeance is heading back to the Marvel Universe. Robbie Reyes, who inhabits a demonic spirit to become the dark superhero Ghost Rider, will make his return to Marvel’s Agents of S.H.I.E.L.D. for the show’s Season 4 finale. And, what better way is there to close out a surprisingly damn good season of TV than in a fiery blaze of glory?

TVLine confirmed the return of Gabriel Luna, who plays Robbie Reyes, aka Ghost Rider, for the show’s season finale, titled “World’s End.” Currently, most of the top agents in S.H.I.E.L.D. are trapped in a virtual reality built by AIDA (Mallory Jansen) — a reality where Hydra rules with an iron fist. It’s taken a few episodes, but Daisy (Chloe Bennet) and Jemma (Elisabeth Henstridge) have regrouped with the team, but not without some losses; Jeffrey Mace (Jason O’Mara), the powerless Inhuman known as the Patriot, sacrificed himself to save kids in AIDA’s world.

And there will be hell to pay with the return of Ghost Rider. Robbie was last seen in Agents of S.H.I.E.L.D. battling his uncle and dragging him to a dark dimension in the show’s mid-season finale in December. Robbie hasn’t been seen or heard from since, but the door was definitely open for his return. Now, his return is imminent, and Luna took to Instagram to finally address it head-on:

“You guys have no idea how hard it was to keep that a secret for the last few months,” he wrote in the caption of a photo with prolific stunt driver Eddie Braun, who doubles as the driver of Ghost Rider’s Hell Charger.