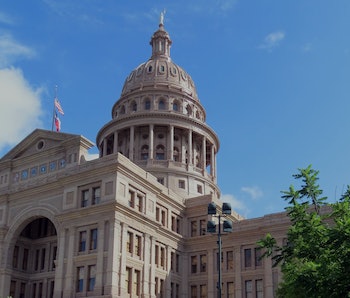 Texas Republican State Representative Matt Rinaldi isn’t having a great day. On Monday, the last day of the Texas legislature’s regular session, protestors filled the house gallery to oppose the controversial Senate Bill 4. In response, the lawmaker told his Latino colleagues that he’d called Immigration and Customs Enforcement (ICE) officers to remove and deport the protestors.

“He came up to us and said, ‘I’m glad I just called ICE to have all these people deported,’” Rep. César Blanco, D-El Paso, tells The Texas Tribune. Several other lawmakers corroborated this account. “He said, ‘I called ICE — fuck them,’” recalls Rep. Ramon Romero, D-Fort Worth.

Rinaldi also allegedly threatened to shoot a fellow legislator for comments made during the occasion. He issued a statement on Twitter defending himself, but this seems to have done more harm than good.

Needless to say, commentators and bystanders took to Twitter to drag Rinaldi for his comments and actions.

Observers and reporters in Texas noted that many of the protestors were citizens, though Rinaldi seemed to assume that they were eligible for deportation.

Romero notes that Rinaldi’s actions represent the type of blanket racial targeting that Latino citizens and immigrants fear the most.

“Matt Rinaldi gave the perfect example of why there’s a problem with SB 4,” Romero tells The Texas Tribune. “Matt Rinaldi looked into the gallery and saw Hispanic people and automatically assumed they were undocumented. He racial profiled every single person that was in the gallery today. He created the scenario that so many of us fear.”

More like this
Entertainment
Sep. 25, 2022
Knock at the Cabin trailer gets roasted online for one bizarre mistake
By Alex Welch
Culture
Oct. 2, 2022
Amazon dropped prices on these wildly popular products & here's what you don't want to miss
By BDG Commerce
Culture
8 hours ago
You need to watch Spielberg’s most divisive sci-fi movie on Amazon Prime ASAP
By Robin Bea
Related Tags
Share: