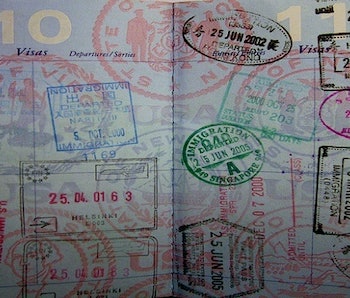 Public debate over immigration in the United States has reached new heights in the past year, with President Donald Trump’s administration calling for increased restrictions on travelers and immigrants from Muslim-majority countries. Sunday on 60 Minutes, CBS correspondent Bill Whitaker reports on one particular aspect of U.S. immigration policy that has tech companies and their workers concerned, but for very different reasons.

The H-1B visa is a special type of temporary visa that U.S. Citizenship and Immigration Services can issue to a maximum of 85,000 foreign nationals each year so they can work in the United States. Only available to people with at least a bachelor’s degree or equivalent experience (with 20,000 of these reserved for master’s degree holders), the H-1B is intended to make it easier for companies to bring talented foreign workers onto their teams. Proponents say it’s a crucial component to ensuring that U.S. businesses stay competitive.

The visa has come under fire in recent years, though, as critics say tech companies have been abusing H-1B to replace American workers with foreign employees whom the companies can pay wages that are below the market rate.

On 60 Minutes, Whitaker speaks with American workers who have been laid off and replaced by employees that came to the U.S. on H-1B visas. All of them report that before they were laid off, they had to train their replacements.

“It was the most humiliating and demoralizing thing I’ve ever gone through in my life,” Leo Perrero, a former Disney employee, tells 60 Minutes.

Craig Diangelo, who worked for Northeast Utilities, says the company referred to this training process as “knowledge transfer.” Diangelo reports that his replacement, who came from India, said he was paid half what Diangelo was paid, and received no benefits.

“I didn’t get laid off for lack of work. I got laid off because somebody cheaper could do my job,” he tells 60 Minutes.

These anecdotes are powerful, but they’re just stories. To see the real implications of this, we need to look at the numbers to find out whether companies are abusing H-1B visas to cut costs rather than fill gaps in a STEM-educated workforce.

An Economic Policy Institute report from 2015 shows that the two biggest employers of H-1B visa holders were Infosys and Tata Consultancy Services. These companies are both India-based IT consulting services, worth billions of dollars, that specialize in outsourcing and offshoring.

“In Fiscal Year (FY) 2013, Infosys ranked first with 6,269 H-1B petitions approved by the government, and Tata ranked second with 6,193,” reports EPI. These employees, EPI reports, were paid less than the prevailing market rate, and most of them moved back to their home countries when their visas expired.

Some of the workers interviewed on 60 Minutes say that their immigrant worker replacements are paid below the market rate. EPI’s analysis seems to support this, though H-1B visas can only be granted for positions that pay the prevailing market rate.

When investigating the interviewees’ claims, though, the numbers could possibly be misleading. H-1B rules are meant to ensure that a worker performing a job that’s worth $70,000 gets paid that salary. But some critics suspect that companies force highly skilled immigrant workers to take demotions or strange job titles with no local point of comparison to make it appear that they are being paid in line with market rates. In other words, a worker who should be making $100,000 is given a demotion or an obscure title like “System Developer” and paid $70,000. In this way, employers can remain in adherence to the letter of the law, but not in spirit. There’s not substantial proof to support this claim, though it has some strong supporters.

Getting back to the case of Tata and Infosys, consider the fact that the U.S. government only approves 85,000 applications each year. So in 2013, 12,462 H-1B visas — almost 15 percent of all visas issued that year — went to employees of two companies that specialize in sending U.S. IT jobs overseas. This definitely supports the claim that companies are abusing the visa system.

To put this in perspective, though, that is a very small portion of the U.S. full-time labor force of over 123 million people.

Still, job losses are life-altering for the people they affect, and protecting American jobs seem to be at the forefront of the new administration’s labor policy agenda, according to an early draft of an H-1B reform bill obtained by Bloomberg.

“Visa programs for foreign workers … should be administered in a manner that protects the civil rights of American workers and current lawful residents, and that prioritizes the protection of American workers — our forgotten working people — and the jobs they hold,” reads the draft.

But tech companies are worried that such reforms could hurt their ability to recruit talented employees, and policy analysts think this it is a misguided, isolationist tactic. Bloomberg reports that Gary Burtless, who researches labor markets for the Brookings Institution, says immigrant STEM workers are crucial for building up American companies, leading to more secure jobs in the long run.

“Discouraging such people to apply for visas to enter the United States to work — I can’t imagine how that can be considered to be in the American national interest.”

There are no easy answers in this debate. It does seem that the H-1B visa program allows some companies to find loopholes to outsource American jobs. On the other hand, the H-1B program supports high-tech companies with a vital workforce, and despite the benefits of the program, with an administration keen on protecting American jobs, we’ll likely see significant changes to this program in the coming year.

More like this
Culture
23 hours ago
Lost Never Solved Its Weirdest Sci-Fi Mystery, But This Episode Came Close
By Jake Kleinman
Culture
Feb. 2, 2023
Buck Rogers in the 25th Century’s Most Baffling Change Also Gave Us Its Best Character
By Ryan Britt
Culture
Jan. 31, 2023
Lost Jumped the Shark by Breaking Its Most Important Rule
By Jake Kleinman
LEARN SOMETHING NEW EVERY DAY.
Related Tags
Share: