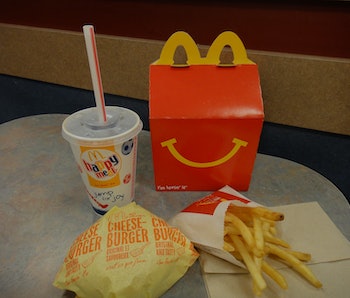 If you read science news in the popular press, you’ve probably come across articles about how junk food is just as addictive as street drugs. You may have rolled your eyes at the suggestion that white bread is like heroin. Well, a study published Monday in the open-access neuroscience journal eNeuro suggests that this comparison could be more accurate than previously thought. It appears that the foods we eat early in life can reinforce the brain pathways associated with pleasure-seeking behaviors, pathways that are associated with eating fatty foods and taking amphetamines. This means that our childhood eating habits could forever shape the way we eat.

We know that our genes often determine the chemical receptors in our brains, and therefore what foods we crave. But the food we eat may actually change the way these receptors and associated pathways function. Dr. Guillaume Ferreira, a nutrition and neuroscience researcher at Université de Bordeaux in France, and his colleagues found that rats who consume a high-fat diet when they’re young respond more strongly to amphetamine when they’re older. This study has implications for the study of the chemical basis of addiction, suggesting that reward-seeking behavior can take multiple forms and that unhealthy eating habits in adulthood share an underlying basis with drug use.

This study focuses on the process known as sensitization. Sensitization describes the way our bodies respond to different types of stimuli. In the case of the rats in this study, the scientists examined their sensitization to amphetamine, a central nervous system stimulant that’s similar in effect to the prescription drug Adderall and the illegal drug methamphetamine. Usually, drug sensitization involves someone experiencing an increased effect of a drug after repeated doses of the drug. But what they found was that rats experienced increased effects of drugs as a result of a non-drug input. In other words, it seems that fatty foods made the rats more sensitive to drugs. This suggests that the foods we consume while we’re growing up could influence the way we seek rewards later in life.

To perform this research, Ferreira and his colleagues fed male rats a high-fat diet from the time they were weaned — adolescence — until the time they reached adulthood, about three months. Then they measured the rats’ locomotor responses to multiple injections of amphetamine as well as their brain activity in dopamine pathways. What they found was that the rats who had grown up on a high-fat diet displayed a high level of sensitization to amphetamine, both in their locomotor responses and in their brain chemistry.

This may sound strange, but keep in mind this simple fact: Feeling good is mediated by similar pathways in the brain, no matter whether your good feelings are caused by taking drugs, seeing a good friend, or eating tasty food. Our brains reward us with the feel-good neurotransmitter dopamine for doing things that make us feel good, and research suggests that there is an evolutionary basis to the good feelings we get from eating fatty foods since our foraging ancestors could accumulate life-sustaining energy stores by consuming nutrient-dense foods that are rich in fat. So basically, our brains reward us with dopamine for doing things that help keep us alive. And even though we don’t generally forage for food these days, these neurological pathways are still alive and well. This plays out in the study from Ferreira and his colleagues.

Scientists found that rats that had grown up eating a high-fat diet showed increased dopamine cell activity in the ventral tegmental area (VTA) and increased dopamine release in the nucleus accumbens (NAc). This suggests that this dopamine system, known as the VTA-NAc pathway, had been primed during the rats’ youth to encourage reward-seeking behavior.

If these results can translate to humans, it could help us better understand what underlies our desire to seek out foods that aren’t good for us, as well as possibly help us understand the chemical roots of addictive behaviors.

More like this
Science
6.28.2022 10:00 AM
How are drugs absorbed in the body? The science of medicine, explained
By Tom Anchordoquy and The Conversation
Mind and Body
6.25.2022 3:00 PM
What makes eggs organic? A USDA expert cracks open the complicated answer
By Elana Spivack
Science
6.27.2022 11:00 AM
Letting your cat go outside could spread “life-threatening” parasites — new research
By Amy Wilson, Scott Wilson and The Conversation
Related Tags
Share: