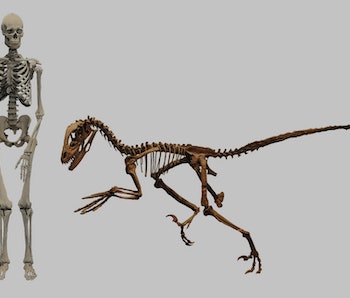 Greg Gianforte won the congressional race in Montana yesterday despite earning an assault charge just a day earlier for allegedly body-slamming a reporter to the ground, breaking the journalist’s glasses.

That incident failed to sway sufficient votes against him, as did an earlier ad campaign in which famous paleontologist Jack Horner urged against voting for Gianforte on the grounds that he is anti-dinosaur and anti-science.

Gianforte is decidedly not anti-dinosaur, a fact he can prove with a $290,000 donation receipt to the Glendive Dinosaur & Fossil Museum, the second largest dinosaur museum in Montana. Here’s the catch: The Glendive Dinosaur & Fossil Museum teaches that the world is between 6,000 and 6,400 years old, that dinosaurs lived among humans and voyaged on Noah’s Ark, and that they subsequently went extinct because of overhunting or climate shifts.

Christians who ascribe to the view that the Earth is just several thousand years old are generally referred to as Young Earth Creationists. Gianforte has not come out one way or another on his beliefs as to the age of the Earth or the story of the dinosaurs, but he has aligned himself with proponents of this worldview. He is a member of Grace Bible Church in Bozeman, Montana, which teaches the Bible as the literal word of God. He supports various efforts to educate children from a biblical perspective.

Young Earth Creationists are famous for imitating the language and institutions of science to promote unscientific views. Ken Ham’s Ark Encounter theme park in Kansas is built like a replica Noah’s Ark, full of museum-like exhibits on the “science” of the flood. It even includes — you guessed it — a pair of dinosaurs. Earlier this month a colleague of Ham’s, Andrew Snelling, launched a lawsuit against the National Park Service for failing to grant him permission to collect rock samples in the Grand Canyon for the purpose of geological research.