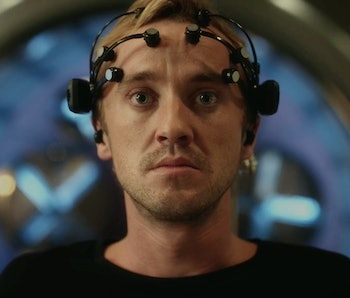 The Season 3 finale of The Flash provided a lot of surprises, and even though Team Flash was able to pull off the inevitable victory against Savitar, albeit with a few sacrifices, Savitar’s ominous prophecy still came true.

Spoilers for the Season 3 finale of The Flash follow.

Long before we knew that Savitar was a time remnant of Barry Allen running around in some kind of super-suit, the so-called God of Speed was just a mythic figure being worshiped by occultists.

In the mid season finale, “The Present,” Cisco brain-hacked Julian, and the team was able to speak to Savitar. Most importantly, Savitar delivered one hell of a prophecy to the team:

“I know your destinies. One shall betray you. One shall fall. One will suffer a fate far worse than death. This is the knowledge I have for you about your everlasting damnation.”

We knew almost immediately that the original intention for this prophecy was for Iris to die, but the betrayal and “fate worse than death” shuffled around considerably throughout the season. Was Wally letting Savitar out of the Speed Force the betrayal? Was him then getting trapped in there the “fate worse than death?” Or maybe Caitlin becoming Killer Frost was both? You could even make the argument that Julian not letting Caitlin die, therefore making Killer Frost permanent, was an act of betrayal.

But as the season finale wrapped up, it became clear that, as is often the case with time travel, the future is unavoidable. Though the team was able to stop Savitar and save Iris, that exact same prophecy held true in the end.

“One shall betray you”

Killer Frost, one of the most powerful meta-humans that the show has seen, was on Savitar’s side up until the very end of Season 3. Her betrayal of Team Flash allowed the God of Speed’s plan to almost succeed. If Cisco hadn’t sabotaged the upgraded Speed Force Bazooka, Savitar would have scattered an infinite number of his clones throughout all of time with Killer Frost’s help. If she had remained one of the good guys, then H.R. might have lived to drum another day.

You could make the argument that H.R. letting Iris’s location slip to Savitar was something of a betrayal, but the often nearly useless member of Team Flash was so remorseful that he took Iris’s place and wound up dying as a result. Using his facial transmogrifier, he made Iris look like him and turned himself into Iris, so in the pivotal moment when Barry wasn’t fast enough to prevent Savitar from stabbing “Iris,” it was H.R. who was impaled. All along, somebody had to die on Infantino Street.

“One shall suffer a fate worse than death”

Since pretty early on in the season, we all knew that a speedster had to replace Savitar in the Speed Force trap, a place where the prisoner is terrified for a seemingly infinite amount of time. It’s what drove Savitar insane. For Wally, he had to relive the moment of his mother’s death on an infinite loop, and who knows what Jay Garrick had to endure while he was stuck in the Speed Force. Though the Speed Force itself seemed much less hostile towards Barry, it still took him away from his friends and family. Worst of all, he had to say goodbye to Iris. For Barry, nothing could be worse than losing all of that.

Despite the fact that we’ll inevitably see Barry escape the Speed Force in some fashion, Savitar’s prophecy turned out to be completely fulfilled, even though the God of Speed was erased from existence.