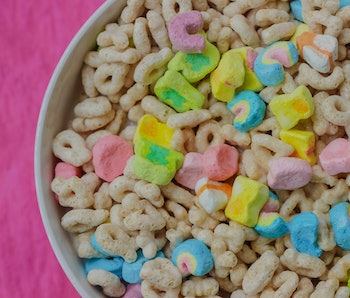 When I called 1-888-SAFEFOOD, the FDA’s aptly named hotline for food safety concerns, the woman on the other end of the line was at first apprehensive. But then I stated my intent — debunking the conspiracy theory that Lucky Charms harbored paint thinner.

The anonymous woman on the other end of the line breathed a heavy sigh of relief. “It comes in waves,” she said of the persistent myth that the beloved cereal is full of killer chemicals. “Now it’s at all time high that people are calling about that.”

Lucky Charms contain a lot of ingredients, as might be expected of a cereal with bright pastel marshmallow “charms.” Notably, luck isn’t one of these ingredients — but trisodium phosphate (TSP) definitely is.

It’s not the first time TSP has been causing problems. For years, the internet has recycled persistent myths about the dangers of TSP in cereal.

So what’s TSP doing in your breakfast cereal? Basically, TSP gives food a nice texture so it can withstand sitting on the grocery store shelf for months until you pick it up and take it home.

In a different form, however, TSP is also a cleaning agent, comparable to bleach. Some people take that to mean there’s paint thinner in their favorite breakfast food midnight snack.

The thing is, these naysayers are wrong. “The general first principle of toxicology is that the dose makes the poison,” Carl Winter, a food toxicologist at the University of California, Davis, says. “Everything is safe at a low enough dose. Anything could be dangerous at a high enough dose.”

When TSP is sold for paint removal projects, it’s water soluble. You mix about one half a cup of the stuff into two gallons of water. According to Snopes, that leaves you with about 300 grams of TSP in the solution, which is about the weight of an entire box of Lucky Charms. While the precise amount of TSP in cereal isn’t known, as the FDA thinks the substance is safe enough for manufacturers to decide how much to use on their own, it’s probably certainly not in the triple digits.

What’s more, “if you were to drink a can of paint thinner, you’d have a lot of problems,” Winter says. But, he continues, “I don’t know if it’d be the trisodium phosphate. There are a lot of other chemicals there.”

Evidence currently suggests the lethal dose of TSP is 7,400 milligrams per kilogram. Quora user Malcolm Sargeant did the math the last time this conspiracy theory cropped up (just a year ago, in 2016). Sargeant calculated that someone who weighed 90 kilograms (or about 200 pounds) needs to eat 666 grams in one setting for a fifty-fifty shot at death.

In case it isn’t clear, no matter how many Lucky Charms you eat, consuming a few hundred grams of cereal-based TSP is impossible.

While it’s blowing up again right now, TSP isn’t the only food additive to cause this kind of chaos, either. “You can find things in food that are in all kinds of commercial project,” Winter says. People have been scared of everything from chemicals in Subway’s bread to just about everything the notoriously fear-mongering Food Babe has blogged about.

But instead of bashing people who are misinformed, we need to engage them in conversation and advocate for the facts. “It all comes down to you who you trust … From my perspective, we have to give a lot of credence to evidence,” Winter says.