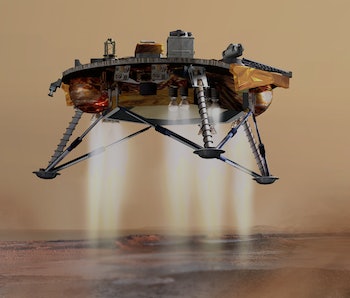 On this day in 2008, the Phoenix spacecraft landed on Mars. It was the first mission to Mars led by a public university in NASA history and though it only survived a few months on the red planet, the mission has been viewed a success since.

The mission — backed by the University of Arizona, the NASA Jet Propulsion Laboratory, and Lockheed Martin — saw the Phoenix become the first lander successfully in a polar region, where temperatures can drop as low as minus 238 degrees Fahrenheit.

It was a short-lived mission, meant to last 90 sols (Martian days), with just two goals. The first was to test for water in the Arctic plains, which NASA confirmed it found on July 31, 2008, after Phoenix dug up dice-sized clumps of a bright material with its robotic arm, which vaporized in just four days, suggesting that it consisted of water ice.

The second goal was to assess planetary habitability by analyzing the chemical make-up of the soil. It did this by cooking up large samples of soil inside its oven and testing the vapors.

From this data, NASA concluded that the martian soil consisted of magnesium, sodium, potassium and chloride ions with a low salinity and pH. All of these factors would indicate that life could survive on the planet. But, perchlorate, a chemical used in rocket propellants, ammunitions, fireworks, and matches made NASA scientists debate about the likelihood of habitability because it is toxic to some microbes.

In addition to these amazing discoveries, Phoenix’s cameras returned more than 25,000 pictures of the surface of Mars.

The Lander ended up surviving for 157 sols, much longer than expected. But, in November 2008, when the Martian winter hit the polar region, the lander lost connection with NASA. After repeated attempts by the Mars Odyssey Orbiter to get a signal, Phoenix was declared officially dead in May 2010. It was believed that the solar panels succumbed to ice, shutting down the lander’s power and technology.

Phoenix advanced our understanding of Mars’ weather and climate cycle and gave us the first concrete evidence that we might not be the only life in our solar system. It has also lead to the advanced technologies we will see on the Mars 2020 rover and future human missions to Mars.