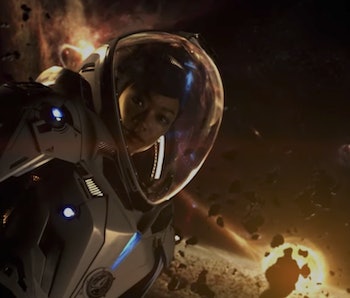 The first trailer for Star Trek: Discovery is here. And it looks like war with the Klingon Empire will be front and center.

On Wednesday, during the CBS “Fall Upfronts,” presentation, the first Discovery trailer finally emerged. With a look and feel similar to the J.J. Abrams Trek feels, the show delivers on a promise to cinematic and big. The trailer also confirms that the show is a prequel, set exactly ten years before the original Star Trek.

War with the Klingons looms large in the trailer. This lends credence to fan speculation that the show will center on a secret peace mission between the Federation and the Klingons. Because Discovery writer Nicholas Meyer also directed 1991’s Star Trek VI: The Undiscovered Country, this makes a certain amount of sense. That film was about peace between those two outer space governments finally happening after several decades of a cold war.

Watch the trailer in its boldly going glory right here.