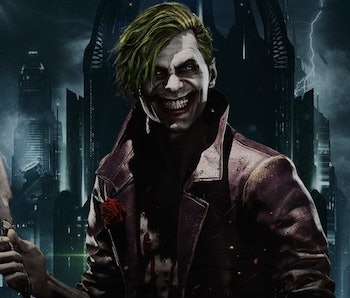 Somehow, the Joker is back to put a smile on people’s faces in Injustice 2, despite being killed by Superman during the events of the first game, Injustice: Gods Among Us. A sequence in the story mode for the new game explains exactly how that happens, and it has everything to do with Scarecrow’s fear toxin.

After the Joker tricked Superman into killing Lois Lane and triggering a nuclear explosion that levels Metropolis in the first Injustice, the Man of Steel literally ripped the Joker’s heart out and promptly began his totalitarian regime.

The Joker’s presence in the new game has been known for some time as a presence that “haunts” the heroes and villains alike. But a new sequence from Injustice 2 confirms that the Joker is still dead. With Harley fighting for Batman and the good guys, this new manifestation of the Clown Prince of Crime is a hallucination that Harley has when she’s gassed with the Scarecrow’s fear toxin. The Joker shows up — along with her more traditional harlequin-style costume — and Harley has to face her fears in combat.

Check out the Joker’s debut in the cutscene below.

Injustice 2 is out now for PlayStation 4 and Xbox One with mobile versions on iOS and Android.