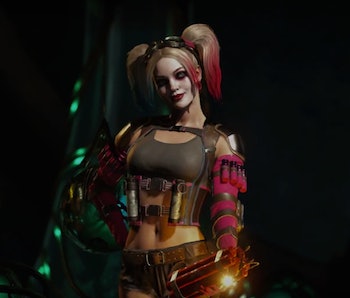 Regardless of how you felt about DC’s recent film, Suicide Squad remains a fun concept, particularly in a gaming setting, because the story follows a group of bad guys with cool as hell skills. They’re perfect comic book characters, dynamic and prone to arguments, but they’re even better in a combative video game. So it’s no shock that Harley Quinn and Deadshot are the newest additions to the upcoming Injustice 2, as demonstrated in the game’s latest trailer.

Harley Quinn is a returning character from the original Injustice: Gods Among Us, which was released on consoles back in 2013. Deadshot is new to the game, and he comes fully loaded with guns, guns, and more guns. Given that NetherRealm previously developed Mortal Kombat X, we expect his play style to be similar to Erron Black’s.

The Suicide Squad movie aesthetic is also in full force in Injustice 2. Even Harley’s “classic” costume looks influenced by the film, and we half-expected Deadshot to be voiced by Will Smith.

The first Injustice gave players an explanation as to why characters like Batman could actually punch Superman — there was some cosmic force mumbo jumbo involved — but it will never stop being strange to watch Harley Quinn pummel Wonder Woman with a baseball bat and have the attack actually do damage.

Check out the trailer for Injustice 2 below, which will be released on PlayStation 4, Xbox One, iOS, and Android sometime in 2017.