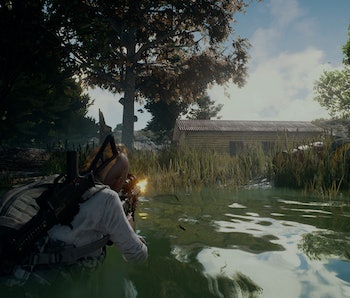 Originally released as a mod by Brendan “PlayerUnknown” Greene within the Arma community, PlayerUnknown’s Battlegrounds is a standalone version of his vision, and the latest game in a long lineup of battle royale experiences available on the PC. Like other battle royale games, such as H1Z1, PlayerUnknown’s Battlegrounds* puts players into a gigantic battle for survival in dangerous locations with weapons scattered about the playing field. As the available safe area on the map decreases with each passing minute, players are then forced to use the equipment they’ve collected to fight each other to the death until one is left standing and declared the winner.

As I’m sure you can imagine, the competition is fierce and extremely skilled — making the world of Battlegrounds a difficult one to survive in if you don’t come prepared. So, if you’re looking to jump into one of the most popular games on Steam or improve your skills to climb to the top, here’s seven things you should know for your next jump.

Each match of PlayerUnknown’s Battlegrounds begins with players tucked aboard a large cargo plane cruising over the map. Once prompted to eject from the plane, you’ll parachute down on the island, wherever you’d like, and start collecting equipment to keep yourself alive with. Most players tend to head straight for a major town or large military base to get the best weapons, but instead of following them, you’ll want to head to a less-populated area to collect equipment of your own, avoiding the massive firefights that end up thinning out the herd. The smart play is to avoid early engagements, collect a bunch of good equipment, and then proceed to eliminate those who survived the early engagements.

Even though vehicles can paint a large target on your back, players can hear from miles away. They provide a much faster alternative to running, which comes in handy when you need to cover a lot of ground quickly. Usually, you can find transportation relatively early during each match, filled with enough gas to get you where you need to go, too. Just remember to keep an eye on the road, though, because hitting anything with enough speed can actually injure or kill you, provided you aren’t paying attention.

Not every piece of equipment is going to look good on your character, but that doesn’t mean it lacks any sort of advantage from a protection standpoint. While scavenging, always be on the lookout for armored vests and helmets you can equip to absorb damage from enemy gunfire. Helmets will prevent you from being killed instantly with a well-placed headshot and break in the process, while vests will eat countless amounts of damage from close-range weapons, like shotguns. The higher the level, the more protection the piece of equipment offers, so be sure to snag any Level 3 pieces you can.

Doors Are Your Friends

Despite being one of the oldest tricks available in the survival handbook, using doors to determine where your enemies are located is a habit worth establishing if you want to keep a step ahead of the competition. In PlayerUnknown’s Battlegrounds, every player is focused on obtaining the best equipment as fast as possible once they touch down, meaning they probably aren’t going to take the time to close doors behind them. Use this to track where enemy players have looted, or could be holed up protecting themselves, allowing you to get the drop on them, provided you have the weapons to do so.

If you’re just jumping into PlayerUnknown’s Battlegrounds after spending a ton of time playing other shooter games like Rainbow Six Siege or Battlefield 1, you’ll probably opt to play the game completely in first-person instead of third-person. Not only does this deny you a massive advantage when engaging enemies around corners, but it prevents you from being able to hold the ALT key to freely move the camera around while running through open areas. This puts you at a massive disadvantage from a situational awareness standpoint, so be sure to spend some time practicing in third person if you’re looking to climb to the top.

Don’t Rush Into a Fight

Unless you are a player who loves to run towards danger while playing survival games, you’ll want to avoid as much gunfire as you can until you’ve made it to the final few minutes of a match. In most engagements, you’ll be outnumbered and outgunned by the competition, so it’s best to sit back and wait for enemy players to make their presence known first. Then, once the dust has settled, and you have a good beat on your enemies, make your move and eliminate the remaining competition.

Time is everything in PlayerUnknown’s Battlegrounds, whether you’re running towards the next location on the map or equipping a new set of attachments on your weapon of choice. While looting new items or managing your inventory, you won’t be able to move or fire your weapon, which gives enemy players a huge advantage against you. Naturally, you’ll want to minimize this downtime as much as possible by using shortcuts, such as right-clicking modifications in your inventory to automatically equip them to a matching weapon or use the Tab key to click and drag items to your inventory instead of manually picking each individual one up.

More like this
Gaming
7.2.2022 1:00 PM
You need to play the best game about demolishing rich people’s stuff ASAP
By Mo Mozuch
Gaming
7.2.2022 2:00 PM
Overwatch 2 support players are finally getting some respect
By Robin Bea
Gaming
6.30.2022 5:00 PM
Everything you need to prepare for Monster Hunter Rise: Sunbreak
By Steven T. Wright
Related Tags
Share: