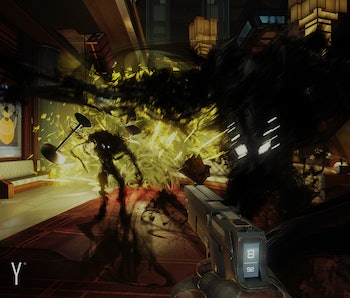 The world of Prey is a deadly and familiar one, filled with nods to other games like BioShock’s supernatural powers, Half-Life’s scientific weaponry, and Dead Space’s twisted alien enemies, all packed into a beautiful, spacefaring vision. You’ll be playing as Morgan Yu, a research scientist working aboard a privately-owned space station called Talos I. That’s where an alien collective known as the Typhon has breached containment. Once you’ve escaped being locked up yourself, you’ll begin to piece together the mystery behind why they managed to escape and work on eliminating every last one before they make it down to Earth.

Like Arkane Studios’ previous project, Dishonored, Prey is a game about playing how you want to play, meaning that you’ll be let loose into a massive world with little to go on. We’re here to help remedy that. Here are a few things you should know before diving in and a few habits you should develop while playing Prey:

While exploring the various rooms and laboratories of Talos I in Prey, you’ll continuously come across different kinds of Typhon aliens no matter how carefully you tread. Some are certainly more dangerous than others in direct combat due to their enhanced strength and powerful abilities, but none will surprise you more often than the first aliens you’ll encounter: mimics. These little spider-like Typhon are capable of blending into the environment by becoming a normal object you’d use in-game — like a coffee cup or box of ammunition — before attacking you aggressively when you try to interact with them. If an area looks friendly or void of enemies, look for something that doesn’t belong — like two chairs at a single desk or two coffee cups sitting under a single dispenser — to get the jump on mimics and clear them out before they surprise you.

One of the easiest and more important lessons you can learn in Prey is to conserve your ammunition for powerful weapons like the shotgun. Holding on to as much ammunition as possible is key to surviving against some of the most dangerous Typhon aliens like the Phantom and Nightmare, which can kill you in a few hits if you aren’t prepared to keep them at a distance and blast their health away as quickly as possible. While a few shotgun shells might lay waste to a group of mimics on a conference table, they will be better used in tandem with the GLOO Cannon to obliterate a Phantom who can deal obnoxious amounts of damage if it gets too close.

Break Down Anything You Don’t Need

Throughout the space station, you’ll find machines called recyclers, which can be used to break down items, weapons, and consumables you don’t need into valuable crafting materials you can then repurpose. Don’t forget to get rid of anything you don’t need whenever you find one, which will keep your inventory clean and allow you to construct whatever you do need at a Fabricator with raw materials.

Available from the second you first step foot on Talos I, your flashlight is a very basic but powerful tool you can use throughout the game to make Typhon aliens easier to see. There are dozens of dark areas, objects, walls, and obstacles scattered throughout Prey that the pitch-black mimics can easily blend into during combat situations. Whenever you find yourself in open combat, be sure to turn on your flashlight so that you can see mimics easier against your surroundings and the shadows cascading over the environment. Don’t use it unless you’ve been seen though, otherwise, you’ll give away your position.

The GLOO Cannon Is Your Best Friend

There’s a massive arsenal of weapons, powers, and abilities throughout Prey you can equip yourself with to deal with the Typhon in open combat, but nothing will be as powerful as the GLOO Cannon you obtain during the first hour of the game. Like BioShock’s wrench and electro bolt dream team, the GLOO Cannon is perfect for setting up critical hits and immobilizing your enemies regardless of what weapon you combo it with. Use this to freeze your enemies in place, especially heavy-hitters like Phantoms, and finish them off with a few powerful shotgun blasts.

Even though it may not seem very important when the tutorial first pops up on your screen highlighting the suit mechanic, repairing it is key to staying alive while roaming around Talos I fighting off Typhon enemies. Essentially, the more damage your personal suit takes, the less damage it absorbs from enemy attacks, which makes keeping your suit in pristine condition one of your top priorities. To do so, you’ll have to use Suit Repair Kits scattered about the station or craft them yourself once you’ve found a blueprint that allows you to do so. Repair it whenever a kit can reach maximum efficiency, and try not to let it fall below half. Otherwise, you’ll be losing more health than your medical tools can restore.

One of the major scientific inventions at the center of Prey’s narrative, the Neuromod allows you to modify Morgan with a bunch of different abilities provided you have the neuromods to do so. During the beginning of the game, you’ll unlock a hefty amount of neuromod points to use in Morgan’s major skill trees, which you should save instead of spending them right away. Once you’ve collected between 14 and 20, head into your skills and begin to invest them into whichever play style best suits you, whether that be stealth, combat, hacking, or a combination of every skill tree. Just remember to save a few for when you unlock Typhon abilities. Otherwise, you’ll have to go scavenge before getting access to some great abilities like being able to mimic objects in the environment yourself.