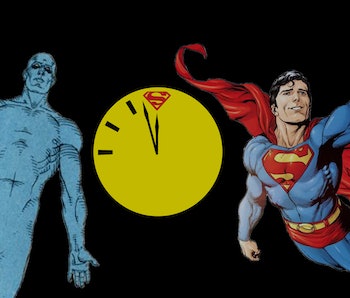 Johns announced Doomsday Clock during an interview with Syfy Wire over the weekend, and he described the book as “the most personal and most epic, utterly mind-bending project” of his career. “With Rebirth, I opened the door to Manhattan. Part of that was I loved the real-world influence Watchmen has. I put Manhattan out there, and always thought there was a Manhattan/Superman story to be told, but then … it grew. It took my heart and soul over.”

According to Johns, Superman and Doctor Manhattan perfectly represent the spectrum of humanity, which he said is key to the themes of Doomsday Clock. Manhattan, a being who has “lost his humanity,” and Superman, as an alien “who embodies humanity more than most humans,” will be featured predominantly in Doomsday Clock, in addition to the rest of the DC Universe. It’s unknown if other characters from Watchmen, such as Nite Owl or Silk Spectre, will also appear.

Another character who could be ruled out is Doomsday, one of the most notorious villains in Superman’s history from 1992’s The Death of Superman. “Obviously, people know who Doomsday is, but he’s not a part of the story, but I like the implications of it. People will think the last time they heard Doomsday and Superman, he died, so what is this going to be? What is he going to go through this time? And how will it affect them going forward?” said Johns.

Johns, who in addition to the comics is also a TV producer with credits in Smallville, Arrow, The Flash, and the upcoming live-action Static Shock, also said that Doomsday Clock will not be a sequel to Moore’s Watchmen, nor will it cross over with other ongoing comics like Action Comics or Tom King’s Batman (except for the prequel story “The Button,” the four-part miniseries just released in Batman and The Flash. “No watered down one-shots or mini-series on top of this one,” said Johns. “This is a standalone story. There is only Doomsday Clock.” However, the book will have a far-reaching impact on the entire DC Universe afterward. “It will affect everything moving forward and everything that has come before. It will touch the thematic and literal essence of DC.”

“I love the idea that Watchmen influenced DC, but what would that look like in reverse?” added Johns in the interview. “And it goes well beyond that.”

Doomsday Clock, from Johns, and artist Gary Frank, will come out in November.