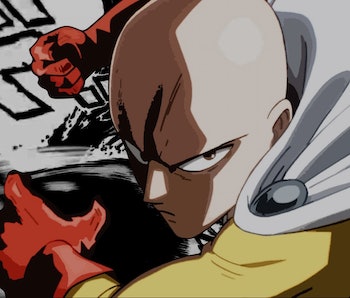 WAN PAAAAAAAAAAAAANCH! Saitama’s journey as the hero with the strongest jab in the world will continue when One-Punch Man returns for Season 2 — uh, eventually. But until then, fans are cooking up hot theories surrounding the mysterious origins of Saitama and the identity of the highest-ranked member of the Hero Association, Blast.

Based on the ongoing manga from a writer known as One, One-Punch Man follows a man named Saitama, who has trained his body past physical perfection and wields the deadliest punch known to man. He saves the world from monsters that have arrived on Earth without warning, making him a superhero who wanders like a lone samurai, yearning for a real challenge.

Fans of One-Punch Man have a lot of time on their hands, because Season 2 of the anime doesn’t even have a current release date. (At least the manga, of which the anime faithfully adapts, is still ongoing.) For those tuned in, here are a handful of theories that the internet is mulling over.

1. There Will Be More to Saitama’s Origins

Saitama claims that his origins are simple and straightforward. And in the original webcomic, they are. Saitama simply broke past his internal limit to become incredibly strong. And on a metal level, the point is to spoof the self-serious superhero genre by eschewing the tragedies that motivate Batman, Superman, and Spider-Man. Saitama was simply bored. So, instead of working as a businessman, he worked out: 100 push-ups, 100 sit-ups, 100 squats, 10-kilometer run, “EVERY SINGLE DAY.”

But, what if there was more to it than that? A few fans on Reddit posit that in the world of One-Punch Man, a phenomenon has occurred in which people become their obsession. This is evidenced in the first episode, when a half-human, half-crab monster claims he was changed one day because he loved eating crabs. Redditors theorize that Saitama’s obsession to be the strongest manifested in his unbelievable strength that has become its own kind of curse.

2. Blast’s Identity Will Not Be a Mystery Any Longer

Ask ten different One-Punch Man fans, and you’ll get ten different ideas about Blast’s identity. The highest-ranked member of the Hero Association, who never attends meetings, Blast looks like an average human who is dressed eerily close to Saitama himself. But as #1 in the Hero Association’s elite S-ranking, Blast must have some kind of god-like identity and origin to go with it.

And Blast is driving fans nuts. TV Tropes has some ideas: Blast is Saitama’s father; Blast is a woman; Blast is too strong to even be on Earth; Blast is secretly the C-rank loser hero Mumen Rider. And some fans talking on Wikia think Blast could be an alternate-reality version of Saitama, sort of like on The Flash. Or even, Blast is related to Saitama. Who knows!

3. Saitama Will Die and Fight God

This one’s definitely out there, and not a likely thing to happen in Season 2, but in a few years the escalating stakes will make this scenario at least not impossible: One-Punch Man will end with Saitama dying, or fighting God, or something. Something big.

Season 1 ended with Saitama achieving a B-class in the Hero Association, which he currently is in the manga. At some point, Saitama will have to rank up, eventually achieving S-class (unless he’s the next Ash Ketchum and will never become a real Pokémon Master, even after like 20 years). At least one fan is looking that far ahead to ponder what’s in store for the distant future of One-Punch Man, and it’s looking crazy as hell.