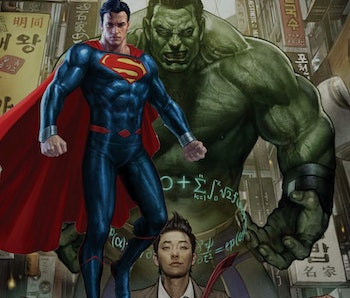 It’s a rare occasion when the Big Two cross paths, but Marvel writer Greg Pak and DC Comics writer Gene Luen Yang sat down as guests for a nerdy edition of the Asian-American pop culture podcast They Call Us Bruce. Pak, who has written for Marvel’s Hulk, and Yang, who has written a number of Superman stories, eventually entered a one-sided debate about the age-old comic book question: Who would win in a fight, the Hulk or Superman?

In addition to writing comics featuring the classic Hulk and Superman characters, Pak and Yang, two of the most prominent Asian-American comic book writers, have introduced new Asian superheroes to the Marvel and DC canon. In 2015, Pak reinvented a dormant character — cocky, Korean-American teenager Amadeus Cho — and made him the new Hulk in place of Bruce Banner for Totally Awesome Hulk. Meanwhile, in the DC Universe, the Chinese government recreated Superman’s powers and endowed them onto Kenan Kong, another cocky adolescent from Beijing who stars in Gene Luen Yang’s New Super-Man.

At around the 35-minute mark of the latest They Call Us Bruce, host Phil Yu throws down the gauntlet. Although both Pak’s and Yang’s answers come with caveats and X-factors, both agree that the Hulk — either Bruce or Amadeus — would more likely get the upper hand on the Man of Steel. But Superman isn’t just a fighter, which makes all the difference.

“When I’ve been given this question before it’s usually with Clark Kent,” Pak says. “My honest answer is that, if all they’re doing is fighting, Hulk will win, because Hulk is the strongest one there is. The angrier he gets, no matter how strong Superman is, Hulk can get stronger if you make him mad enough.”

Pak isn’t being biased; he wrote Clark Kent and Superman during his three-year run on DC’s Action Comics. Which is why he knows how Superman could possibly win over the Hulk — by stopping the fight.

“Superman, being who he is, will not just make his enemy angry. Also, Superman, Clark, would take the time to figure out what’s going on and try to diffuse the situation. Clark doesn’t just charge into battle and start fighting people for the hell of it. He doesn’t lose control in that kind of way. And if he does, he comes back. So Clark would win by eventually finding a way to reach the hulk and diffuse him, and the Hulk would turn back into Bruce Banner.”

That’s when the podcasts’ hosts change the question: What if it’s Amadeus Cho (as the Hulk) versus Kenan Kong (as Super-Man)? “Then it depends when in his emotional development Kenan is,” Pak explains.

Yang posits that Amadeus — like Bruce Banner — can get stronger as the Hulk gets angrier. Pak teases that that hasn’t happened in The Totally Awesome Hulk, yet. “Amadeus has not yet demonstrated that he’s got the depths of anger that Bruce has,” he says. “So we don’t know how strong he can get. He says he’s the strongest one there is because he’s Amadeus. Of course, he’s going to say that. And according to the rules, he could be. But how angry can Amadeus get? What will put Amadeus over the top?”

That’s when Yang, as the writer of New Super-Man, interjects: “I feel like that answers the question. Amadeus would clearly win, because Kenan is a dick! He would make Amadeus so mad. He would beat those depths of anger.”

Pak jokes, “Sadly, that means they both lose.”

Check out the podcast below, where Pak and Yang also talk about writing for Marvel and DC and the origins of Amadeus Cho and Kenan Kong.