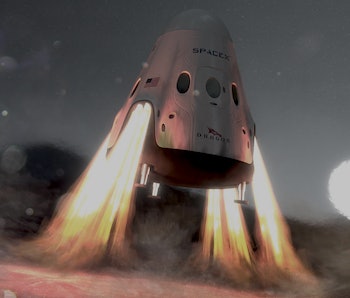 You know what’s insane? NASA, ESA, and China are all sending rovers to Mars in 2020 — each of which is aimed at various degrees to studying the ancient and current potential for Mars to host life. And that’s actually the boring news about the red planet that year — because SpaceX will send not one, but two Dragons to the surface of the planet that year as well.

At the Humans to Mars Summit in Washington D.C. on Tuesday, NASA’s manager of science missions, Jim Green, told the audience during a panel discussion with luminaries from other space agencies and companies that the Elon Musk’s company would strike to double the chances of success by sending over two uncrewed versions of its flagship Dragon spacecraft to Mars (hence the name Red Dragon) in 2020 as part of its first attempt to go to Mars.

We already knew SpaceX was attempting to land an uncrewed ship on Mars in 2020, but the company has not yet officially annonced two Red Dragon missions in the works for that year. However there’s no reason to doubt the veracity of Green’s statements — after all, SpaceX is not exactly shy about upping the ante when it comes to space.

And of course, NASA is probably pretty happy to hear the news as well. The agency is providing logistical support and advice to SpaceX’s Red Dragon missions in return for data relevant to entry, descent, and landing. The general consensus among most experts is that supersonic retropropulsion will be a key technology for making crewed landings on Mars successful and safe. The Red Dragon will be basically the first demonstration of this technology on Mars, and everyone’s eyes are going to be watching closely to see what can be learned.

Although SpaceX’s risk-taking is an admirable driver in helping move the path to Mars forward, the green lighting of two missions in one launch window is also a sign that the company has a significant expectation of seeing the first Red Dragon mission end in failure. After all, the world has bore witness to many of the company’s explosive disappointments. If the first spacecraft crashes and burns on its way to Mars, don’t be too surprised — just hope that SpaceX can figure out how to fix the problem fast enough before the second Dragon tries to make a smooth landing.