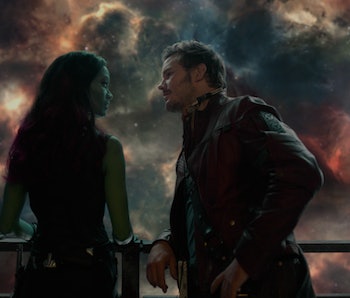 Googly eyes and dancing aside, Star-Lord and Gamora have spent two Marvel movies gravitating toward each other, only to pull away at the last second. And despite the ever-present tension between two of the heroes of the Guardians of the Galaxy films, that unspoken thing between them isn’t going to fade away or be resolved anytime soon. Here’s why Gamora (Zoe Saldana) and Peter Quill (Chris Pratt) probably won’t ever do it.

Throughout Guardians of the Galaxy Vol. 2, Peter keeps referencing his relationship with Gamora as an “unspoken thing.” Peter’s made it pretty obvious that he’s into Gamora — both romantically and sexually — but Gamora tends to always be the one to pull away when something looks ready to happen. In one of the funniest scenes in the film, Mantis (Pom Klementieff) uses her empathic powers to reveal that Peter feels “love” for Gamora. Drax (Dave Bautista) busts into his trademark, uproarious laughter, and Peter is mortified, making excuses while Gamora blushes and looks amused.

By the end of the film, Gamora is a little more willing to admit her feelings for Peter, especially after thinking she’d lost him and trying to jump to his rescue to save him, but, still, nothing happens. And it probably never will.

In Marvel’s comics, Gamora and Star-Lord are both definitely members of the Guardians of the Galaxy — they’re just never romantically involved.

Instead, Peter is involved with X-Men member Kitty Pryde (Shadowcat), even getting engaged to her at one point before breaking it off pretty recently. And Gamora is romantically tied to Richard Rider (Nova), and was also once involved with Adam Warlock, a plot point that might prove interesting in the future since Adam was introduced at the end of Vol. 2.

An outright jealous Peter in the next Guardians film would be far less entertaining than a grumbly, competitive Peter as he tries to prove to Gamora and himself that he’s “better” for her than Adam.

There’s also a chance in the future of a Nova appearance, since the Nova Corps, the intergalactic police force Nova is tied to, appeared in the first Guardians. Unfortunately for Peter, that’s two competitors for Gamora’s attention. Meanwhile, there’s no chance in hell Kitty Pryde will appear in the MCU anytime soon due to complicated film company contracts. Kitty has a firm footing in the X-Men universe, which is owned by Fox.

Aside from comics canon, Peter and Gamora’s potential relationship is also thriving in the will-they-won’t-they world. Vol. 2 sees Peter using a Cheers metaphor to describe his relationship with Gamora, comparing it to the on-again, off-again romance of Sam (Ted Danson) and Diane (Shelley Long) in the popular ‘80s sitcom. It’s a relationship that’s fiery and full of arguing and anticipation, but Peter clearly didn’t get to see the end of the series, as it ran until 1993. By the end of the series, Sam and Diane aren’t a thing anymore and have actually broken up, partly due to Long leaving the show behind.

Plus, at the end of the day, who really wants Peter and Gamora to get together? Television series always get less interesting when the romantic interests finally get together, and the plot usually falls apart from there. Gamora and Peter’s relationship is already complicated enough without adding sex to the equation.

Guardians of the Galaxy Vol. 2 is now in theaters.