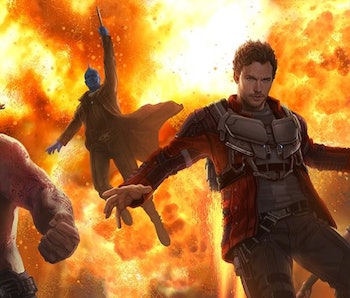 And so, like the first film, the aesthetic of Guardians of the Galaxy Vol. 2 wears its ‘80s nostalgia proudly. Though none of the songs on the “Awesome Mix” soundtrack are actually from the 1980s, that makes a modicum of sense. Star Lord’s mom mostly liked songs from the 60s and 70s. Still, ELO and George Harrison were still very popular in the ‘80s, making songs like “Mr. Blue Sky” or “My Sweet Lord” feel like ‘80s songs, even though they’re really not. This is kind of like how Star Wars and Alien feel like ‘80s movies even though they came out in 1977 and 1979, respectively.

Still, there are a ton of legit ‘80s winks in Guardians of the Galaxy Vol. 2; so many, that audience members born after that decade may miss a reference or two. Here’s your complete guide to understanding the ‘80s in the latest Marvel space epic.

Spoilers ahead for Guardians of the Galaxy Vol. 2.

Skelator (He-Man and the Masters of the Universe)

When Star-Lord tells his father about all the “weird shit” he’s going to make with his new powers, he mentions a statue of Skelator. This is a reference to the famous cartoon He-Man and the Masters of the Universe, which ran from 1983-1985 but was syndicated in reruns until 1988. Peter Quill was abducted by the Ravagers in 1988, meaning he was probably binging He-Man right around that point. Want a hop-skip-and-a-jump to another MCU movie through He-Man? In the early ‘80s, J. Michael Straczynski wrote a bunch of the scripts for the early He-Man cartoons, and in 2011, he helped shape the story for the first Thor movie. He even has a cameo trying to pick up Thor’s hammer. Really!

Peter Quill spends a good portion of Guardians of the Galaxy Vol. 2 trying to convince Gamora (Zoe Saldana) that they are destined to become a couple. To do this, he uses the metaphor of the on-again, off-again romance of Sam (Ted Danson) and Diane (Shelley Long) on the sitcom Cheers. That sitcom ran from 1982-1993, and the initial seasons were focused on the brainy ex-grad student Diane Chambers and recovering alcoholic Sam Malone engaged in a perpetual, fiery romance. But, if Star-Lord really wants he and Gamora to be like Sam and Diane, that’s because he wasn’t around to watch the whole series. Sam and Diane don’t get together in the end, because by the ‘90s, Long had left the show, and the character of Diane was replaced by Rebecca (played by Kirstie Alley).

Knight Rider and the Hoff

In one of the more hilarious/ridiculous plot points in the entire movie, Peter reveals to Gamora that he used to tell kids at school that his dad really was David Hasselhoff, then, of Knight Rider fame. The original show ran from 1982-1986, which means Peter would have needed to perpetuate this lie when he was really little, like around the age of five. In the final scenes of Guardians of the Galaxy Vol. 2, Ego briefly morphs into a contemporary David Hasselhoff, played by David Hasselhoff. The new song in the closing credits — “Guardians Inferno” — is sung by Hasselhoff, too.

Star-Lord makes an early reference to Pac-Man in the film, but in the climax, as he’s battling Ego, Star-Lord becomes Pac-Man! For the sake of clarity, Pac-Man was an arcade game, first released in 1980, which also happens to be the fictional year of Peter “Star-Lord” Quill’s birth. So, when given god-like powers, it makes sense that Star-Lord would turn to his favorite video game from his childhood.

Wrath of Khan Funeral in Space

The very ending of Guardians of the Galaxy Vol. 2 features a space funeral for Yondu (Michael Rooker). Now, Yondu as a character is nothing like Spock, but the 1982 movie Star Trek II: The Wrath of Khan did sort of set the standard for ending a space epic with a teary space funeral. The Wrath of Khan thing can kind of work in another way, too: The entire plot of that movie was about a madman (Khaaan!!!) trying to get control of the Genesis Device, which could create planets. Ego, in Guardians of the Galaxy Vol. 2 is a giant planet, trying to create more. Plus, in a sideways Cheers reference, Kirstie Alley is also in The Wrath of Khan.

Lets face it, the presence of both Stallone and Russell in this movie are intrinsically referencing the ‘80s. Ego (Kurt Russell) as Star-Lord’s literal father makes sense as a metaphor, since both Guardians of the Galaxy movies are descended directly from the ‘80s, a time when Kurt Russell was initially coolest in films like Big Trouble in Little China and Escape from New York. But, just to make sure the ‘80s nostalgia is nice and thick, Sylvester Stallone (Rambo) is — nearly inexplicably — in this movie, too.

Guardians of the Galaxy Vol. 2 is out in wide release now.