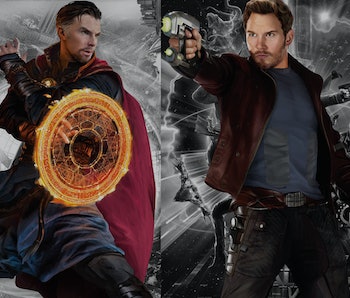 With almost ten years of ceaseless production, the Marvel Cinematic Universe is vivid, diverse, and only expanding in scale. Late last year, the MCU expanded to the multiverse as it introduced the Sorcerer Supreme in Scott Derrickson’s Doctor Strange. At the time, the film was praised for its kaleidoscopic visuals and playful photography that paid homage to the work of Silver Age comics artist Steve Ditko. But now, with James Gunn’s Guardians of the Galaxy Vol. 2, not only does Doctor Strange have competition in the trippy visuals arena, it might actually be outmatched by its own Marvel brethren.

Let’s get something out of the way: Doctor Strange was and is a breathtaking movie, and it would be my first choice to watch were I a college freshman experimenting with recreational stimulants. Shot digitally with an array of cameras, including a few Arri Alexas and Panavision’s Panaflex Millennium XL2, cinematographer Ben Davis was right at home on Doctor Strange, having already shot for Marvel in movies like Avengers: Age of Ultron and — yes really — 2014’s Guardians of the Galaxy. But the cinematography is just one element (however crucial) in the complex operation of filmmaking.

While Doctor Strange was trippy as balls, it wasn’t trippy enough. Stephen Strange’s debut still felt tethered to the trappings of the MCU, and its distinct visuals, limited to set pieces, just weren’t enough to make the movie stand out. Chiefly due to its familiar narrative structure — Strange’s arc is not unlike other superhero journeys, like in Iron Man or Batman Begins — the Sorcerer Supreme’s gorgeous world just wasn’t enough to give his movie that needed oomph to offset the superhero fatigue.

In Doctor Strange, arrogant Manhattan surgeon Dr. Stephen Strange suffers a debilitating accident that injures his hands. To heal, Strange ventures to Nepal and learns of the mystic arts and of the multiverse under the Ancient One (Tilda Swinton). It’s a whole new world for Strange, and it’s there where the ho-hum color palettes become vivid, but only for a few standout scenes. In between, Doctor Strange is unquestionably a Marvel movie.

Now there’s Guardians of the Galaxy Vol. 2, shot by Henry Braham. Not only was it an onslaught of color, energy, and scenic science-fiction landscapes, it was also a family drama, with severe daddy issues, that was set in space and felt unlike anything else from Marvel Studios. Sure, big things still get blown up, as they do in the Marvel Universe, but its exceptionally strong antagonist and kitschy-is-cool identity gives Vol. 2 an edge. The film owns its weirdness, as opposed to Doctor Strange that only gave its audience glimpses. Vol. 2 played its visual strengths boldly, whereas Doctor Strange played it conservatively.

Identity is a problem in the MCU. While hardcore fans can wax poetic about the varied genres, like the conspiracy thriller of Captain America: The Winter Soldier or the sword-and-sorcery fantasy of Thor: The Dark World, the tropes the MCU shares among itself threaten genre fatigue to settle in. There’s a house style to Marvel Studios, one that each new film seems to avert before actually cementing into the mold. This “house style” is reflected in the well-known “color problem” of Marvel movies, so it’s necessary for current and future MCU productions to crank up the color tones.

Where Doctor Strange treats its visuals as an unnatural phenomenon, Guardians Vol. 2 treated its weirdness as natural. There’s something about that authenticity in the narrative that just clicks, and as a result, Vol. 2 feels more like the trippy, bombastic eye circus Doctor Strange was meant to be. There’s a lot to love about Doctor Strange and its visuals, especially if you’re a fan of the original Steve Ditko comics it enthusiastically paid homage to. But the “origin story” of Doctor Strange undermined it and its attempt at putting the Marvel multiverse on the big screen.

Guardians of the Galaxy Vol. 2 is in theaters now.