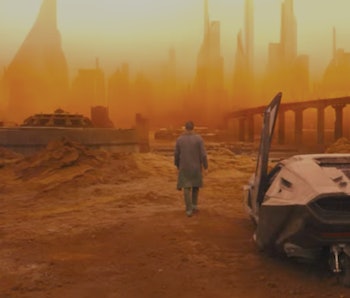 Like Rick Deckard (Harrison Ford) before him, the latest cop sent to track down replicants might turn out to maybe be a replicant himself. The first full trailer for Blade Runner 2049 heavily implies that Officer K (Ryan Gosling) might be a replicant.

In the original Blade Runner, Rachel (Sean Young) asked Deckard if he’d ever “retired a human by mistake.” Decades later, fans still debate if Deckard — the original Blade Runner — was in fact of the same synthetic species as his prey. With the release of Blade Runner 2049, it seemed like fans would get an answer to that question. But now, it seems like the new protagonist’s humanity will be called into question, too.

The first full-length trailer for Blade Runner 2049 is heavy on action and seems to focus the character Joi (Ana de Armas) helping Officer K (Gosling) uncover a conspiracy about replicants. When K tracks down Deckard, he tells the grizzled Blade Runner, “I want to ask you some questions.” But then, the trailer pulls another replicant twist when Joi tells K he is “special.” She also says part of his story “isn’t written yet.” This assertion combined with ominous torn pages from a book seems to strongly suggest Officer K’s biography was manufactured to make him believe he was human. This is what happened with Rachel in the first film, and maybe Deckard, too.

See also: Where is Deckard Living in Blade Runner 2049?