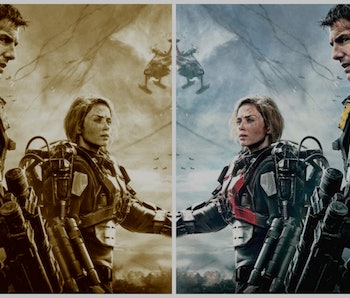 Time loops create all sorts of possibilities for defeating our alien overlords in the 2014 sci-fi action-flick The Edge of Tomorrow, but now, time loops are also responsible for the title for the film’s sequel. Edge of Tomorrow 2 will, in fact, be called Live Die Repeat and Repeat; a riff on the tagline and quasi-alternate title used to promote the first film: “Live. Die. Repeat.”

On May 7, in a Collider interview, director Doug Liman confirmed the title for the Edge of Tomorrow sequel. “It’s incredible! Way better than the first film,” Liman said. “And I obviously loved the first film. It will be called Live Die Repeat and Repeat.” The funny thing here is that during the initial marketing of the first film, the words “Live” “Die” and “Repeat” were featured prominently in the trailers. When it came time for Edge of Tomorrow to be released on DVD and Blu-ray, this catchphrase became the de facto new title of the film.

A release date for Live Die Repeat and Repeat, has yet to be confirmed, but Liman says “It’s not an if, it’s a when.” But, because the film’s subject matter is all about going back in time and repeating history in a slightly different way, it’s totally possible the sequel to Edge of Tomorrow already exists somewhere in an alternate timeline.