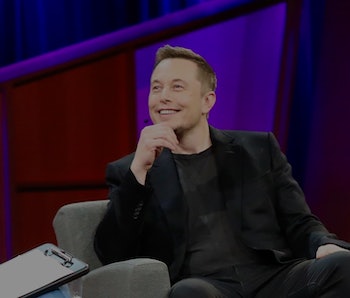 Apple’s developing autonomous car technology and testing it on public streets in California, a fact we know because it was required to apply for a self-driving permit from the state’s DMV. Just don’t expect the iPhone maker to partner with Elon Musk’s Tesla, the electric car company that notably is developing autonomous driving tech.

During a conference call to discuss Tesla’s first quarter financial earnings on Wednesday, the question was put to Musk was by Wall Street analyst Adam Jonas of Morgan Stanley, who said that Apple has enough net cash to buy Tesla more than three times over. Jonas asked if there was “anything that Apple does or has — besides having more money than they know what to do with — that could be helpful in Tesla’s mission to accelerate the transition to shared autonomy and sustainable transport. Could they be the type of firm you could partner with and is this something you could talk to [Apple CEO Tim Cook] about?”

“Yeah, I don’t think they want to have that conversation or at least I’ve not heard any indication that they do,” said the Tesla CEO. “Obviously Apple is a company that makes great products, and yeah, I use their phone and their laptop, it’s cool. I don’t know what else to say.”

When asked if he saw Apple as a competitor or potential partner with Tesla in its development of self-driving cars, Musk offered this: “I don’t know what they’re going to do on the car front; it’s not clear.”

In February, Musk told Bloomberg TV that “we had conversations with Apple, I can’t comment on whether those revolved around any kind of acquisition.”

On Friday, Musk said during his interview at the TED 2017 conference that he expected total autonomy to be operational in at least two years, and that by November or December of this year, a Tesla would be able to travel cross-country by itself, without a person touching the wheel once.

Meanwhile, Apple became the latest addition on April 14 to a list of technology and car companies to have registered with the California DMV to test autonomous cars.

Tesla expects product 5,000 units a week of its Model 3 — the stripped-down version of the Model S sedan — by the end of this year, and increase that number to 10,000 a week in 2018. (Production begins in July at its assembly plant in Fremont, California.) Every Model 3 will come with Hardware 2 and the Autopilot software, along with eight cameras, that will enable it to drive itself. Tesla hasn’t released the number of pre-orders for the sedan (which starts at $35,000), but the number was above 300,000 a year ago.

Tesla has been “anti-selling” the Model 3 since October but Musk said Wednesday that it hasn’t quite worked.

“Reservations continue to climb week after week,” he said.

By the time Apple gets its autonomous technology into the public — it seems it will just be the technology, not a full car, but that’s not yet clear — there were will be thousands of self-driving Teslas already on the streets.