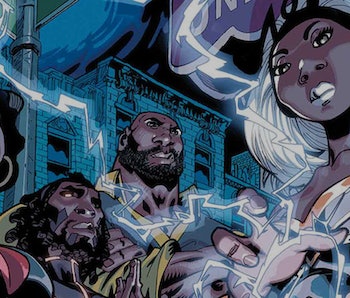 Hashtag this: Portrait of a seemingly-liberal but comically ignorant conglomerate of anti-heroes talking out the side of their collective necks. Through hip-hop variant covers, recruiting a cohort of beloved writers and creatives representing a multiplicity of experiences, and a forthcoming all-black, comic-based film, Marvel has demonstrated that it’s at least concerned with its marketability to the historically marginalized — and it has to be.

If the critical and commercial success of representational casting in Hollywood is any indication, there’s a large swath of young kaleidoscopic consumers clamoring — and willing to pay for — realistic portrayals of their experiences in the superpowered worlds of comic books. But for all the ostensibly diverse-conscious motives, Marvel is known to step in its own shit every once in awhile, because the company doesn’t quite understand how to enact substantial, sustainable representation.

In the last year alone, Marvel has repeatedly stepped into a trap they set for themselves. The outrage around the sexualized images of Riri Williams in The Invincible Iron Man should have been enough of a warning. Before her debut, the 16-year-old black girl genius who plays the new Iron Man was subject to some bizarre white male fetishization, which happens pretty often in comics, though it’s underreported. Adding last year’s tone deaf decision for a black Spider-Man, Miles Morales, to admonish a fan for celebrating Morales’s ethnicity, and/or recklessly defending those obtuse choices, simply doubled down on bad PR in a calendar year. But lo and behold, the latest public gaffe: Marvel’s VP of Sales, David Gabriel, claimed in an interview that Marvel’s emphasis on non-traditional (non-white, non-male, non-heterosexual) narratives are the reason the company’s sales dipped in 2016.

This belief isn’t just shortsighted. As many have noted, it’s also inaccurate. If Gabriel looked at recent sales charts, he’d see that nontraditional stories — Ta-Nehisi Coates and Brian Stelfreeze’s Black Panther run and Jane Foster’s ongoing stint as the Norse god in The Mighty Thor — were the highest-selling comic books in 2016.

Editor-in-Chief Axel Alonso later tried to save face by telling fans not to worry about their beloved diverse heroes, but the whole affair was a harrowing reminder of how much whiteness covets the minority experience without having to engage, critique, or celebrate the spirit of that experience. What should’ve been a unique opportunity to praise the commercial success of diverse titles like Black Panther, Ms. Marvel, or Miles Morales as Spider-Man became misguided scapegoating of already marginalized voices.

Underneath its colorful veneer, Marvel is still a company tending towards antiquated sensibilities. That dissonance between the characters that the corporation creates and the target audience grounds Gabriel’s small-minded statement and legitimizes Marvel faking the funk.

Let’s be clear, corporations commodifying the call for more diverse properties for profit isn’t new, and it probably isn’t changing anytime soon. What’s annoying is this idea that white corporate creatives should be given a pat on the back for fetishizing this body, this experience, and this reality. Gabriel and Alonso speak as if creating characters who accurately represent their reading audience is a risk. They simply cannot think of this skin of mine outside of its implied political resourcefulness and the inevitable discourses it evokes out of those who encounter it in fear or intrigue.

When Gabriel foolishly cited retailers’ qualms surrounding comics with non-white, non-male, and queer heroes as the reason behind Marvel’s shitty financial year, he painfully reinstated the idea of liberal “diversity” as a service to a larger political agenda — and not a recognition of the inherent power of comics that reflect their readership. On the contrary, books bottoming out in sales, like International Iron Man and All-New Hawkeye, mirrored the old, stale guard they targeted.

Despite all the hand-wringing over the place of these comics, it’s clear that audiences are down with the brown, the black, and the other — if these stories are written in a way that feels real, inasmuch as a hero comic can be. The common denominator in Marvel’s successful diversity work is the inclusion of their targeted audience within the auspices of the writers’ room.

G. Willow Wilson’s work on Ms. Marvel, for example, is soaring digitally, even though it’s penned by a white woman who, despite being a recent convert, is still under the guidance of Sana Amanat, whose presence as both creator and editor ensures accuracy. Wilson’s penchant for gravid dialogue and Amanat’s corrective lens coalesce for an awesome, relatable character in Kamala Khan.

Gay’s story, which contextualizes the events leading up to the Wakandan Civil War in the main plot, is centered around the love, fearlessness, and honor of two queer black women — and personal bodyguards to T’Challa — who revolted after years of negligence via the royal patriarchy. Their stories are about black people, yes, but they are not caught up in the pretension of a tokenized character like similar comics written by white men. When I crack open something like Black Panther or World of Wakanda, it’s a relief because I’m not beaten over the head with their blackness. The characters can just be in a way that no doubt references both mainland African and Black culture with an insight that feels real. They can exist in this world because they are written by black people who do not feel the need to reassert their blackness. That freedom is sorely lacking in the majority of “diversity” comics.

Marvel fans aren’t just down, they are in fact so desperate for representation that when Marvel disregards their proven model of success to stick a white creative team behind POC books, like on many of Bendis’s books, they still sell. Diversity and discourse go hand in hand, and in our media-based world, they’re increasingly rubbing shoulders with dollars and cents. Now, corporate marketing teams and representatives that do or say utterly dumb shit in the name of “sparking a conversation” are seen as well-meaning and, in some cases, even edgy, or progressive. The inherent problem with framing diversity in this way is that it sterilizes what should be meaningful entry points for new comic readers through tepid attempts by white men to tell stories using the narrow, stereotypical motifs of black, brown, and queer life.

Miles Morales’s Spider-Man, as written by Bendis, suffers from the gap in experience, and the ripples can be felt in the vastly more popular Marvel Cinematic Universe. Not only is Miles’s story penned by Bendis, a white man with no lived experience of the mixed-race culture of Puerto Rico, but it’s also difficult to tell how significant Morales is as a character, because Peter Parker — who is supposed to be dead — is still living his fullest life out here. While Morales’s story has become a bit more nuanced following the merging of the Ultimate and Earth-616 worlds during the Secret Wars event, Morales admonishing a fan for celebrating the teen hero’s black-Hispanic heritage remains a sore spot. Coming to terms with nationality and heritage is a phase many children of immigrants go through (and grow out of), but it’s such an out-of-character response that it feels, problematically, meta; it’s a fourth wall break from a writer who’s tired of having the race conversation, despite writing a character who will always have to have it.

To add a bit of insult to injury, the latest repackaging of Peter Parker’s Spider-Man in the Marvel Cinematic Universe — the upcoming film Spider-Man: Homecoming — features some plot elements from Morales’s story. His friendship with Ganke Lee and a relationship with Katie Bishop, who looks a lot like Zendaya in the film, raises an important question: Why is Miles Morales’s story good enough to cast a white boy and call him Peter but not good enough to get its own direct live-action adaptation?

Marvel’s faux-progressive chickens are coming home to roost, and the company will need to rationalize why they still choose to create barriers between marginalized voices and the writers’ room they crave access to.

To be black and a comic fan is to know that even the most productive minds can’t imagine you whole. It is to be reminded that however they covet our bodies and our culture, our souls; our particular perspective is still insignificant, if not functioning to service their preexisting worldviews. To be black and a comic fan means you hardly get to engage in a black story that simply is — rather than some pet project for a self-styled white knight with a kingdom of profit margins to maintain. Imagine the wide wealth of experiences that could be imbued within Marvel’s pages if the company used diversity consciousness less like a trendy universe shakeup and more like the lens through which the company can speak back to and celebrate their readership.