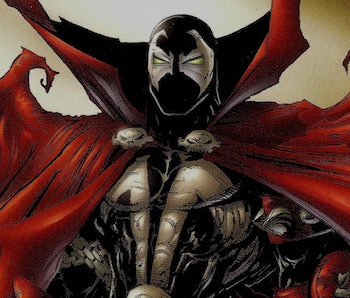 When I was a kid in the ‘90s, I saw my older cousin’s eyes light up when I asked him about Spawn comics. After giving me a rundown of its premise, he digressed, “Oh, but you probably aren’t ready to read something like that.” I remember being heated about his refusal, insulted that he thought I couldn’t handle the story. As an adult who now knows Spawn well, I see that I wasn’t prepared as a kid, and not because the comics are ultra-violent. They are. There was another, more subtle preparation that I needed to undergo before fully grasping the weight of Spawn’s narrative.

Years passed after that exchange, and I began to understand the untruths of the world I roamed as a child. I unlearned the empty promises of American equal opportunity as an adolescent and understood that the color of my skin would never permit me to taste how sweet, true freedom might be. This thing, this blackness, of which I had no control, had already determined my destiny in many ways.

The quiet, bitter suffering black Americans experience while the world continues on around them is insidious and always present. I felt, growing up, that everyone was in on some secret I hadn’t grasped yet, from the good guys in my life (cops, teachers, parents, friends), to the bad guys (neighborhood racists, some of whom were also cops). No matter how hard I try, I told myself, there’s only one life for the black man in America: one lived as a zombie, a dead man walking. It was at this point, around age 13, that I had completed the rite of passage and become jaded enough that, after being kicked out of school, Spawn found his way back into my life.

Creator Todd McFarlane drenched Spawn in agitation and disillusionment. In a violent collision of realms both real and imagined, his comics targeted Marvel and DC for their negligent approach to creator compensation, the laziness in their work, and the played out good/evil binary that marks most superhero comics. When Spawn debuted in the ‘90s, he was a direct attack to the comic book status quo.

After his tragic death at the hands of his powerful employer, Al Simmons is sent to hell where he meets the demon Malebolgia who agrees to give Simmons the one thing he desires most of all: his wife, Wanda. What the demon didn’t tell him was that the deal would cost him his soul, that he’d be given supernatural gifts in order to fight in Hell’s army against the heavens. Inviting a revolving team of brilliant and equally disenchanted storytellers — including Frank Miller, Neil Gaiman, and Jim Lee — McFarlane dismantled the notion of good vs. evil in superhero comics. He placed the spectrum between heroism and villainy in Spawn’s crosshairs and emptied the clip.

Twice betrayed and overflowing with new, if finite, power, Simmons as Spawn is propelled by furious love, loss, and bitterness to wrest control of his life from the spiritual realms, all the while ostracizing himself in the real world. It stands to reason that Simmons, a black man working for an elite government organization, would be met with this particular problem and react the way he did. He had done everything right: lived, loved, upheld the law, and yet was extrajudicially killed for it. As those memories are slowly and painfully brought to the forefront — and as he starts to recognize the folly in reading the world using the lens of good/evil — Simmons’s ire and isolation proportionally swell. The bubble finally bursts in the third issue when, after realizing his own sexual impotence, Simmons declares war on everybody.

More and more, I find myself engulfed in that familiar pit of isolating anger. As the prospect of being seen wholly human in this black skin fades into the bleak reality of this nation’s history, as the memories of violence force themselves into recognition, there is no shortage of moments when rage colors and confounds my purview. Perpetual injustice compels me to bounce between the affirmation of maleness and the stigma of blackness, between the tantalizing notion of limitless freedom and the desire to not only articulate my humanity to the world but to prove myself autonomous.

One must decide — and continue to decide — whether understanding the truth of the world around them is worth the weight of rage. This befuddling white world has convinced many of us that our rage must be focused inward, that we must peel back our skin to prove our humanity for the umpteenth time — violating ourselves in an effort to gain a sense of normalcy, a semblance of love. Before we ever meet him, Simmons has made this impossible choice: “love” and normalcy in exchange for his very humanity.

Spawn isn’t a black comic so much as it’s a comic that recognizes that its main character’s experience as a black man is crucial to understanding the story. A hilarious scene in the second issue (Spawn #2, pg. 14) shows Spawn experimenting with his transformation powers in an effort to revisit his ex-wife, Wanda, after being dead for five years. But because his suit is sentient and Simmons has minimal control, he doesn’t revert back to his previous face; instead, he’s turned into a beefy, blue-eyed, blonde-haired white guy, and in shock says, “No, it can’t be. I’m a black man!” The example might be hamfisted but 1) comics and 2) early ‘90s. But McFarlane’s allusion stuck with me even as a teen because while Simmons was cursed with these amazing supernatural powers, it was taboo for black characters to articulate and carry out Earth-scorching revenge. It was in the ‘90s when the comics were published, and it somehow still is today.

The pivotal moment when Simmons declares revenge is, whether knowingly or unknowingly, McFarlane’s most subtle reference to the brutal, sexualized history of blackness in America. Al finds out that his ex-wife Wanda and best friend Terry had a daughter in the five years between Simmons death and treacherous resurrection. We learn with Simmons that during their marriage, Al and Wanda wanted to have a child but couldn’t, and her baby girl, Cyan, proves that it was Al who was impotent. In utter madness, Simmons cries, “You’ve stolen Wanda from me … taken my face, my very existence away. And you even had to prove it was me who couldn’t produce children … If you’re going to screw me, I’m going to screw you!” (Spawn #3, pg. 19).

The connective tissue between Simmons’s emotional instability and the psychological trauma of anti-black racism felt thick here. Malebolgia, like slave-traders in the Western world, ripped apart his family, his flesh, his only connections to humanity and attempted to force Simmons into servitude. And because the demon bestowed Simmons a finite power that would ultimately kill him once exhausted, Malebolgia inherently put a clock, a predetermined endpoint on Simmons supernatural afterlife. In that way, though he burned his skin from its fleshly trappings, Malebolgia re-blackened Simmons after death, proving that there is no running away from who you are for love or acceptance. At the height of his powers, Spawn is still a dead man walking.

Spawn works as a narrative not because McFarlane is a necessarily deft storyteller, but because, from the very start, the book is concerned with power, who wields it, and the extensive measures that diabolical beings from the devil to the gods to zombies go about maintaining it. Simmons is an incredible tactician that must learn on the fly how to control his seemingly limitless power or face (another) premature death. Spawn alludes to a particular black experience — an amnesiac one, that undergoes conscious-building — informed by the rage that comes from recognizing injustice and deciding how to move on and create a new future for oneself in spite of it.

It takes time and courage to come to grips with that knowledge and push forward. Readers of the original comic series waited two years for the titular character to accept his life, as government assassin Al Simmons no longer mattered. In a moment of catharsis, where his vengeance became tethered to the protection of his new impoverished friends in the alleyway, the real Spawn — a crude amalgam of Al Simmons’s psyche and demonic power — took shape. He recognizes himself as a dead man (Spawn #21, pg. 18) and decides to protect the poor, the weakest among us, even as his power is slowly siphoned away.

It’s been 25 years since Spawn was first published and the character, like any comic book hero, has gone through various permutations. But for a black teenager living in the American South, those first two years of publication stick to me as an imaginative blueprint in dealing with the daily conflict that this skin of mine compels. My blackness isn’t what kills me. It is the people on all sides who have deemed me unworthy of life, of freedom, of unrepentant joy whether by their action or passivity. For a moment, McFarlane and his team of creators conjured the perfect storm of weariness and vengeance, of illusory blackness and death, of a character dealing with the very real feeling of physical abhorrence and his last grasps of a previous life. Within its pages speaks a voice reminding us to be ready, the gray clouds are brewing.