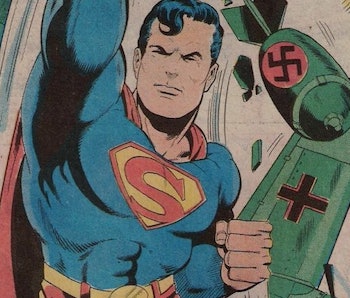 The story Miller wants to tell is an incendiary one: critics and theorists have long argued over Superman’s history with Judaism, and Miller wants to write a text that brings that aspect of Kal-El’s background to life.

When asked about the current status of Superman, both Miller and Azzarello rolled their eyes. “He’s too powerful now,” Miller says. Rather than commenting on either of the current iterations — the Snyderverse version played by Henry Cavill or the younger Clark Kent on Supergirl played by Tyler Hoechlin — both Miller and Azzarello agreed that their definitive Superman is the animated man who appeared in Dave Fleischer’s cartoons in the 1940s.

“Superman, originally, was this character who’d grab the military leaders from opposite sides of conflicts and bring them together to hash it out. He has a history in WWII, and I’d like to put him there again.” Miller adds, “Superman needs to confront his Jewish roots, and I’d like to write that. I’d like to have him face a death camp.”

The Jewish roots Miller is referring to stem partly from comments Jerry Siegel made in his personal notes. When creating Superman, he apparently meant to write an allegorical look at anti-Semitism, and he specifically saw Superman as a Samson character. Even Superman’s birth name from Krypton, Kal-El, is modeled after words in the Jewish vernacular, like Isra-el and Samu-el. “Kal”, specifically, is similar to the Hebrew words for both “vessel” and “voice.”

Comic book analysts have pointed out that Kal-El escaping a crumbling Krypton in a small spaceship mirrors Moses’s escape from Egypt along the Nile. Further, Kal-El choosing the name “Clark Kent” and attempting to hide who he truly is, many have argued, is a fantastic metaphor for the Jewish assimilation that occurred during the 1940s and 1950s, as Jewish Europeans attempted to escape and hide from persecution and violence.

Miller’s Superman, he says, first appeared in Dark Knight as a classic conservative character, enacting a type of black-and-white process that Batman, a radical, could no longer stomach. “I wrote Superman as a foil for Batman, but I want to write his story too.”

Dark Knight III: The Master Race, which will continue with Issue #6 on October 19, has been the definitive Batman story for most fans since Frank Miller began writing it 30 years ago. Before The Dark Knight Returns, the most popular conception of Batman in mass media was still Adam West’s turn in the TV show, more of a goofy children’s character than a brooding vigilante, which is the character we now take for granted.

If Frank Miller were to pen as arresting and influential a Superman story as he did for Batman in Dark Knight Returns, we might see an incredible resurgence for the character. Watching Superman, who hasn’t previously been asked to confront or comment on what about him is Jewish, deal with the realities of Nazi Germany and Hitler’s death camps, sounds like an unprecedented experience for comic book readers. If anyone were to pull it off, it would likely be Miller.