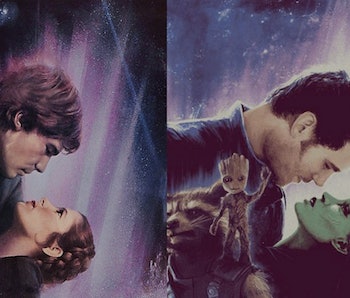 The story of the Skywalkers might not take place in the Andromeda galaxy, but the Star Wars story has always been one for the ages. A new, unofficial poster from graphic designer Matt Ferguson stylizes the gang from Guardians of the Galaxy Vol. 2 as the cast from Star Wars: The Empire Strikes Back.

Ferguson, a graphic designer and artist best known for his alternative takes on movie posters, has given Guardians of the Galaxy Vol. 2 a new poster in the style of Star Wars: The Empire Strikes Back.

The original poster for the 1980 Star Wars sequel prominently featured Han Solo and Leia Organa’s impending romance. Han dipped Leia as they gazed into each other’s eyes, the style a direct reference to Clark Gable and Vivien Leigh on Gone with the Wind’s poster from 1939. Now, adding another layer of meaning is Ferguson’s poster, with Star-Lord and Gamora in the same romantic position.

In place of Luke Skywalker on his Tauntaun from Hoth is Rocket Raccoon, a waving Baby Groot, and Drax the Destroyer. Yondu and Nebula are stand-ins for C-3PO and R2-D2 while the Milano takes the place of a squadron of X-wings.

In the background is Ego the Living Planet, who kind-of fittingly takes the place of Darth Vader from the original poster. If this were exact, then that would mean Han Solo was Darth Vader’s son. So, while it’s not perfect, it’s definitely beautiful.