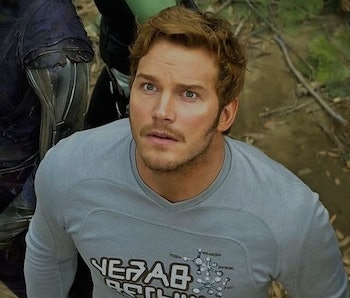 Everyone’s favorite space outlaws have reunited for Guardians of the Galaxy Vol. 2, but does the sequel live up to the hype? As of Monday, early reviews are out for the latest MCU blockbuster, and overall, the reception is positive. But there is a tinge of disappointment from critics: Most say the sequel is a letdown from the sky-high expectations left from the first movie.

Guardians of the Galaxy Vol 2, directed by James Gunn, picks up where the first movie left off. After saving the day, the Guardians are using their notoriety for freelance gigs all around the Andromeda galaxy. Star-Lord (Chris Pratt) leads the team with Gamora (Zoe Saldana), Drax (Dave Batista), Rocket (Bradley Cooper), and lil’ baby Groot (Vin Diesel), who is still growing after his noble sacrifice at the end of the first movie. A new job forces the Guardians to pick up new members, including Mantis (Pom Klementieff) and Nebula (Karen Gillan), Gamora’s sister and a villainous daughter of Thanos.

Early reactions hit Twitter last week while reviews were still kept under embargo. Based on those impressions, the film was bound to be another critical hit. As of now, Vol. 2 still is — it’s at 92% on Rotten Tomatoes — but reading the reviews closely, it appears the Guardians’ shiny reunion isn’t spotless.

Owen Gleiberman of Variety writes that the film “is a witty and extravagant followup, but it works harder for less fun.” He continues:

“Guardians of the Galaxy Vol. 2 is an adventure worth taking, and the number of moviegoers around the planet who will want to take it should prove awe-inspiring. But it doesn’t so much deepen the first Guardians as offer a more strenuous dose of fun to achieve a lesser high.”

Terri Schwartz of IGN argues that Vol. 2 “isn’t as amazing a film as the first and suffers from some pacing issues,” but it is still “a fun time with a lot of heart.”

“Guardians of the Galaxy Vol. 2 is a fun go-around with characters we love to spend time with, but the second film is far denser and has a few more pacing and story problems than the first. Still, it’s a very good movie with one of the most emotionally impactful endings of any Marvel Cinematic Universe story yet.”

TimeOut critic Tom Huddleston describes Vol. 2 as “fast, funny but frustratingly disjointed” with a soundtrack that is “of course, terrific.” But Huddleston found that the new film fell victim to some of Marvel’s well-known structural issues: “big villain, universe in danger, loads of explosions.”

Lauren O’Callaghan of GamesRadar, who is quick to assure that Baby Groot is as cute as everyone wants him to be, is very positive on Vol.2 and notes that its only flaw “is that it’s just not as good as the original (and its villain needs a bit of work).” O’Callaghan adds:

“It’s action-packed, it’s hilarious (although I wish they’d held a few more laughs back from the promos), and its characters still shine bright, with a handful of them even putting in stand-up-and-applause-worthy performances. No one is going to watch this movie and think it’s bad — it just proves once again that Marvel is suffering from its own success.”

Mike Ryan of Uproxx is also very high on Vol. 2, who compared its narrative structure to the monolithic Empire Strikes Back. “Guardians of the Galaxy Vol. 2 exists in its own little bubble and this movie is better off for it,” Ryan writes. “Yes, this will all change soon when the next Avengers movie happens, but for now you just get these assholes. And the good news is: We all really like these assholes.”

But Todd McCarthy of The Hollywood Reporter is less enthused than most, writing unfavorably of its dizzying action sequences that “makes the viewer feel as if trapped inside a pinball machine.” McCarthy is also less impressed with Gunn’s treatment of the characters, writing that they’re like a “bickering family” and “not in an amusing way.”

“But Guardians of the Galaxy Vol. 2 plays like a second ride on a roller coaster that was a real kick the first time around but feels very been-there/done-that now.”