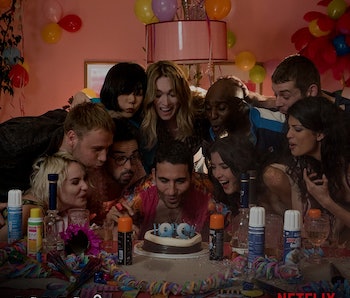 The Wachowski’s Netflix series Sense8 is unlike anything else on television. It’s sprawling in scope, brimming with diversity, and mixes science fiction with sex positivity. Season 1 followed eight people of various genders, races, backgrounds, locations, and sexual orientations as they learned that they were a “cluster” of “sensates,” which means their minds can connect.

Through this connection, they can borrow each other’s skills in dire circumstances, visit each other’s surroundings, understand each other despite language barriers, and have sex with each other from thousands of miles away. As Season 1 built to its climax and introduced the sinister organization BPO and the sinister sensate hunter Whispers, it left several burning questions. Here are the most pertinent going into Season 2:

1. What’s the Deal With Jonas’s cluster?

Jonas Maliki (Naveen Andrews) is a sensate from a different cluster who appears to the sensates at various points, educating them about their condition. He seems like a benevolent mentor but his motives are often unclear, and Yrsa the Icelandic sensate claims he can’t be trusted. To better understand them, Season 2 would do well to shed light upon his own cluster. Why do they never appear? If they’re gone, what exactly happened to them?

2. Who Was Angelica Really?

Angelica, the mother who gave “birth” to the central cluster, is an elusive figure in Season 1. The opening shows her killing herself in a church to avoid Whispers. Throughout the rest of the season, she’s shown in ghostly glimpses. Sense8 later reveals she used to be in a relationship with Jonas, but that’s pretty much all that is known about her. Does her personality or life have any significance to the central cluster? Who was their mother, really?

3. What Happens When One of Them Dies?

4. Is There a Way to Block Whispers Besides Shooting Up With Heroin?

Because Will Gorski inadvertently looked into Whispers’s eyes, allowing him to connect with Will and appear to him, Season 1 left Will in a bind. The Christmas special revealed that Riley was injecting will with heroin in order to keep his mind away from Whispers. Even though the Christmas special had a “love conquers all” spirit, it’s a grim situation for the former cop to be in. It’s also not exactly sustainable. Surely there’s a better way to escape Whispers?

5. Just How Big is BPO and Where Does Their Money Come From?

BPO, or Biologic Preservation Organization, is a shadowy militaristic agency that hunts sensates. They span many countries and governments and seem endlessly funded with boundless resources. But what are their motives and where do their funds come from?

6. Will Wolfgang and Kala Ever Bang?

This is truly the most burning question. The German sensate Wolfgang and the Indian sensate Kala have the most unresolved sexual tension since Mulder and Scully or Clarke and Bellamy.