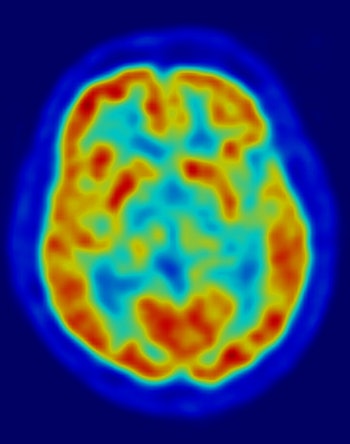 In 1987, the Partnership for a Drug-Free America went on the air across America to spread a simple image — an egg cracked open into a pan of hot, sizzling oil. “This is your brain on drugs,” the tagline went. The ad campaign was catchy, effective, and terribly unscientific.

Three decades later, we know a lot more about what brains actually look like on drugs, thanks to advanced imaging techniques, curious researchers, and study participants willing to take a dose and sit in an MRI machine while they ride the high.

To put it bluntly: Taking drugs is nothing like frying an egg. Addictions have devastating consequences, and some substances certainly have long-term toxic effects. But different brains handle different drugs in different ways. The most striking thing about this avenue of research is how well drug experiences line up with what is physically happening in the brain: You take a hit of acid and feel like the world has lit up; meanwhile, your brain is actually lighting up with new and strange connections that wouldn’t otherwise be possible. That’s pretty neat.

This Is Your Brain on LSD

Last year a team of researchers published the first brain scans of people on LSD that use modern neuroimaging techniques. The results showed a surprisingly strong connection between how people experience an acid trip, and what is physically going on in their brains. Compared to a placebo group, participants on LSD had more blood flow to their visual cortex — the visual processing center — and way more connectivity between the visual cortex and the rest of the brain. The times when this activity was strongest was when people said they were experiencing visual hallucinations.

The study also found a correlation between people’s experience of ego-dissolution — being at one with the universe — and decreased connectivity between two brain regions, the parahippocampus and the retrosplenial cortex.

There has been a resurgence of interest in recent years in the potential therapeutic benefits of LSD. When taken in controlled circumstances, the drug appears to help people overcome anxiety and addictions.

This Is Your Brain on MDMA

In 2014 a team of researchers published results from a study that had 19 participants dose on MDMA, then think about the happiest and worst times of their lives in an MRI machine. The brain scans that resulted showed a pretty cool pattern.

The participants repeated the experiment twice, once on MDMA and once after they ingested a placebo (they didn’t know which they had taken). But on MDMA, they rated positive memories as more vivid and emotionally intense, whereas bad memories were felt less painfully. How the participants experienced the experiment correlated nicely with what their brains actually looked like in the midst of it. When recalling happy times on MDMA, certain areas of the brain associated with emotional processing showed more activity compared with the placebo. When recalling hard times, certain brain regions showed a dulled response.

This goes to show why MDMA, also known as ecstasy, is being investigated for its usefulness in treating post-traumatic stress disorder. In recent trials participants with severe PTSD have overcome their symptoms, saying that on the drug it became possible to remember and process trauma without feeling like they were reliving it.

This Is Your Brain on Mushrooms, Ketamine, and LSD

Last month scientists at the University of Sussex released the first physical proof that psychedelic drugs can put you on another realm of consciousness. Consciousness is a nebulous thing, and studying its physical reality is a tricky proposition. But these determined researchers found a way.

They looked at neural signal diversity, a measure of how complicated your brain patterns are. When you’re asleep, you have less neural signal diversity than when you are awake. Since a person is less conscious asleep than awake, it might follow that in a state of higher consciousness you might have more complicated stuff going on in your gray matter.

And indeed the researchers found that study participants have more neural signal diversity when they were on psilocybin mushrooms, ketamine, and LSD, than when they were sober. They caution that this is a crude and preliminary measure of consciousness, and that more signal diversity doesn’t necessarily mean you’ve reached a high plane of existence.

And yet, this is another example of physical patterns in the brain lining up neatly with how people experience psychedelic drugs. It can feel like your mind is running full throttle; in a very real sense, it is.

This Is Your Brain on Marijuana

Stoners are classically forgetful, but it may turn out that their brains are picking up a lot of the slack. In a study from 2006, researchers found that weed users did just about as well on a hard mental task as their straight-edge counterparts, and yet they used different parts of their brain to get the job done.

The game was to track certain balls on a screen full of balls bouncing off walls and each other. The participants were asked to track either two, three, or four balls in different rounds of play. Brain scans allowed the scientists to identify which regions were active during all three rounds of the game, and also which regions became more active at higher levels of difficulty.

Marijuana users, whether they had THC in their system at the time or not, did fine on the test, but their brains looked different. Certain regions were less active, while others were more so. The researchers suggest that the brain compensates for the brain-numbing effects of weed by calling in backup when presented with a challenging problem. Your brain effectively reorganizes itself to rise to the occasion.

The researchers suggest — based on the differences between active and abstinent users — that going without a joint for a long time will probably set your brain waves back to normal. You can’t un-fry an egg, but being a stoner doesn’t mean you’ll be stoned forever.