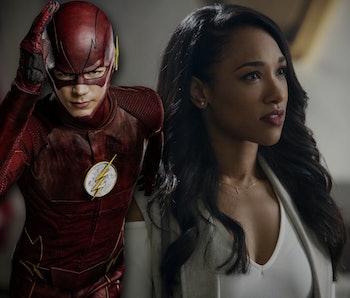 Savitar is coming for Iris West. On The Flash, Barry Allen (Grant Gustin) is doing everything he can to save the love of his life from his greatest enemy yet. As the God of Speed continues to elude Barry Allen of his true identity, Iris West (Candice Patton) is left vulnerable, holding on tight to the few days she has left. Could The Flash really lose Iris West by the end of this season?

As The Flash finishes its third season on The CW, here are all the possible fates of Central City’s best (and also, kind of terrible) journalist.

Here’s the darkest outcome to this season: It’s Iris’s last. While Iris West has been a staple in Flash’s comics for many years, a television show — which has a more limited lifespan than an ongoing comic — is more subject to Earth-shattering changes than a comic that comes out once or twice a month at 20 pages each. But big changes can’t just happen all willy-nilly. Thankfully, The Flash has been building to this outcome for some time.

The principal lesson behind Savitar is that he is paydirt for Flash selfishly rewriting the timeline to suit his wishes. He is a consequence of Flashpoint, and while the Speed Force didn’t exactly send Savitar after Barry, they aren’t eager to help him out either. No matter how or why Savitar got his speed, Barry’s actions at the end of Season 2 led him on a collision course with Savitar.

So Barry must pay the consequences. What better price is there to pay than to lose his world? While it’d be a shame to lose a significant character such as Iris, the stakes being this high and this personal leaves little room to grow after the dust settles. Something has to change, someone has to be affected. Narrowly surviving, although possible and maybe even expected in genre TV, isn’t as satisfying as an ending that solidifies massive change. The hoopla the show has built around this idea only supports this: If Iris doesn’t die, then saving Iris wasn’t the point in the first place.

Iris lives, Savitar is defeated, and the world keeps spinning before the next speedster dashes into town. You can see how anticlimactic this ending would be.

While superhero stories have always traded in restoring the status quo no matter how much things change, TV sometimes plays a different ballgame. Remember how Arrow, a cousin of The Flash, boldly killed off Laurel Lance, or rewrote the Adrian Chase character almost entirely. There’s precedent for big changes, and while Iris’s survival is absolutely on the table, it may not be the wisest play.

For those who didn’t watch the fourth season of the Doctor Who revival, here’s the gist: After spending a dozen episodes with the Doctor, Donna Noble (played by Catherine Tate) becomes the center of the season finale’s plot. She absorbs the mind of the Doctor, so to save her, the Doctor wipes out her memory. Should she remember a single thing about him — their travels to Pompeii, aliens, the TARDIS, everything — her brain would explode. Donna Noble saved the day in Doctor Who, but the cost was too great.

Similarly, in the current The Flash comics (under the DC Rebirth banner written by Joshua Williamson), Iris West doesn’t remember that her boyfriend Barry is the scarlet speedster. Barry is waiting for the right time to reveal his identity to Iris — but unlike Donna, Iris won’t disintegrate if she finds out the truth, but she’d definitely get mad. And until that day comes, the intrepid Central City reporter is clueless as to who the Flash is.

That might be the ideal scenario for the TV series. Iris lives, but how tragic would it be if she lost her memory of Barry Allen and S.T.A.R. Labs? Or, less dramatically, she loses memory of Barry as the Flash. Sure, fans would have to endure the same beats their relationship took in Seasons 1 and 2 all over again through Season 4, but the show wouldn’t lose Iris. Iris just wouldn’t be the same. And if there’s something the The Flash needs, it’s some serious change.